There a lot of discussions lately about sub-Saharan Africa being the new “center” of World Christianity. This, of course, assumes there is such a thing as a “center,” which is highly debatable. Nevertheless, the facts are the facts: Christianity grew tremendously in Africa over the 20th century, from 9% Christian in 1900 to nearly 50% Christian in 2020. 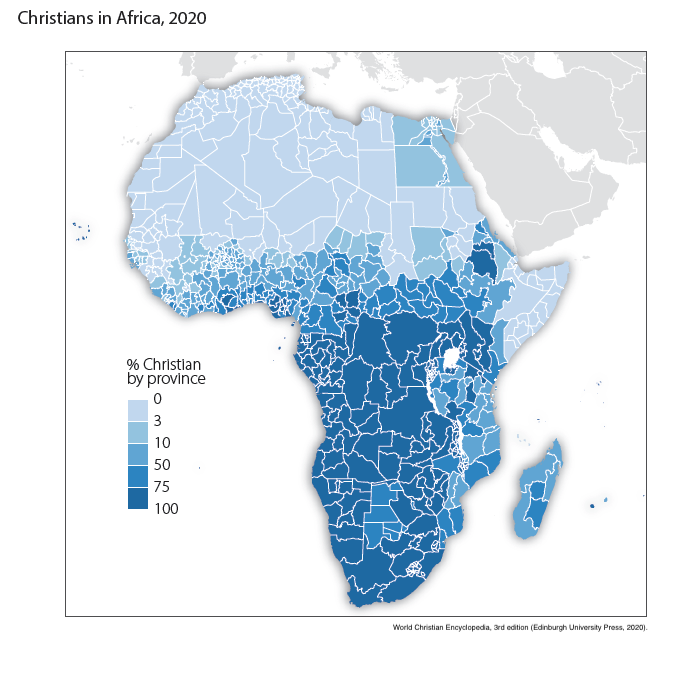 Africa’s change in religious demographics over the 20th century represents the most dramatic shift anywhere in the world. It’s important to remember, however, that Africa’s general population grew tremendously in the 20th century, with the overall population expected to grow to over 2.5 billion by 2050.

Christianity does not have a monolithic presence in Africa. Not only are all four major traditions (Catholics, Independents, Orthodox, and Protestants) substantially present, but thousands of denominations have grown from African soil, most of which are Independent – the most diverse and fastest-growing movement within Christianity. African Christians are increasingly providing leadership in global Christian forums both within and across churches and Christian organizations in Africa and the West.

There is a lot of excitement that comes along with the shift of Christianity to the global South, and especially sub-Saharan Africa. And yet, pressing questions remain. Are Christian resources shifting? While awareness is increasing of the growth of Christianity in this region, many overlook the critical realities that Christians face. They are, simply put, more vulnerable and less healthy than Christians in the global North, with many African countries scoring very low on various health and economic measures.

What does it mean to be part of a global Christian family when such disparity exists between brothers and sisters? This is an important question for the 21st century church, a question that must be addressed by both Christians in the North and South.