Last Friday, June 5, was my birthday. When I was a kid, my friends and I had this sense of wonder that our birthdays felt like national holidays. We eagerly anticipated them. We planned parties and got presents and loved the attention from our families and friends. I’m an adult now, of course, and don’t quite see my birthday in the same way. In fact, I will never experience my birthday the same way again after realizing that I share a birthday with Breonna Taylor, the unarmed black women who was murdered in her Louisville home by police on March 13. They entered her apartment illegally with a battering ram looking for drug dealers. She was an EMT and a first responder. She would have been 27 years old on Friday. She would have celebrated with her family and friends. She would have felt special. But instead, the three officers involved in her death have not been charged with any crimes.

The Center for the Study of Global Christianity unequivocally supports the Black Lives Matter movement. We denounce racism in all its forms – individual and institutional. Racism is antithetical to being human, but also antithetical to Christianity, especially global Christianity. A critical part of studying World Christianity is about locating voices that have been marginalized in Western discourse and helping to amplify those voices for all to listen. We ask questions such as: Where are the new centers of Christian faith in a world after Western colonialism? Where are Christians working to better their societies and make positive change against systems of injustice? Where is the church advocating for the poor and marginalized? At the same time, studying World Christianity is about seeing where churches are complicit in unjust systems; where Christians use their voices to promote xenophobia, racism, classism, and sexism. Both historically and today, churches have been on both sides of activist movements. Sometimes the church has been a forward-thinking institution on social issues, and other times it’s been on the wrong side of history. 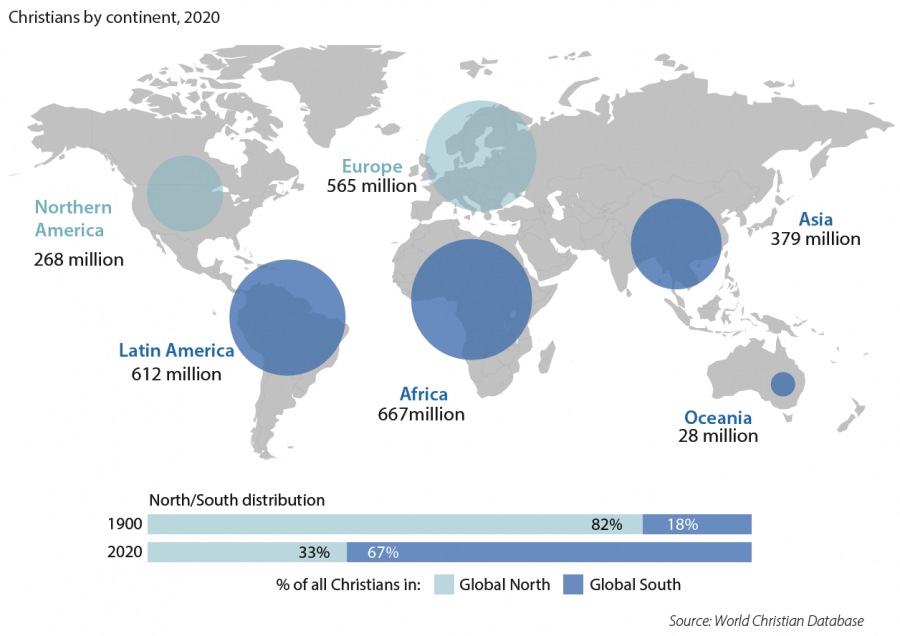 The United States is the country with the most Christians in the world, 244 million (73% of the country’s population). It is also the country with the most Evangelicals (69 million) but they are only 18% of all Evangelicals worldwide. Black communities in the United States are also majority Christian, and at much higher rates than Whites. Despite the demographic reality, many White Protestant Evangelical Christians in this country think they’re the center of the story. American history has indeed been written this way up until very recently. People of color, women, and people of other religions have been “othered” in our historical writing and national discourse. The Black Lives Matter movement provides a corrective to this kind of thinking. Churches need to fight against systemic racism in their own institutions and communities. They need to work toward positive change for people who have been disadvantaged simply because of the color of their skin. We will continue to do this in our public speaking, teaching, and writing as we help students and others think outside their own contexts.

The Color of Compromise: The Truth About the American Church’s Complicity in Racism, by Jemar Tisby

Unsettling Truths: The Ongoing, Dehumanizing Legacy of the Doctrine of Discovery, by Mark Charles and Soong-Chan Rah

I’m Still Here: Black Dignity in a World Made for Whiteness, by Austin Channing Brown

White Awake: An Honest Look at What it Means to Be White, by Daniel Hill and Brenda Salter McNeil

The End of White Christian America, by Robert P. Jones