Over the last two decades, mentoring has become a buzz word in education, business, and the military for leadership development. Although currently in vogue, historically and across many cultures, the concept of mentoring has a long and proven track record. Since the dawn of recorded history, mentoring has been used to prepare leaders for important roles. The word, mentor, comes from the ancient Greek story of the Odyssey. Ulysses, the hero, prepares to leave his kingdom in Greece for the Trojan War. To make sure his son, Telemachus, is trained and prepared to take his throne if he would not return, Ulysses leaves him in the wise tutelage and care of the sage, Mentos. Mentos becomes the quintessential developer of future leaders and the source of our word, mentor. 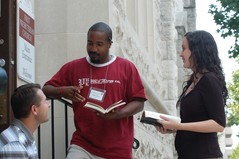 The biblical record also provides numerous examples of a more experienced leader developing future leaders through an ongoing and intense personal relationship. Moses invested his life in his servant Joshua for a number of years before Joshua would take command of the people of Israel. The pattern is repeated throughout Scripture. Elijah had his Elisha, Barnabbas had his Saul, and in like measure Paul invested his energies into his understudy, Timothy. Jesus Christ represents the final legitimization of this leadership development strategy in his three year commitment to his twelve disciples. Jesus spent much of his time during his earthly ministry intentionally pouring his life and insights into the future leadership of what would be the fledgling Church.

Mentoring has served throughout the history of the Church as a practical and effective means of developing pastors and ministers. Charles Simeon almost single-handedly revolutionized the 19th century Anglican Church through his efforts of mentoring scores of Cambridge students who would become the future pastors of England. Among New England Puritans, mentoring in apprenticeships was the primary way of preparing future pastors. A clergyman would recruit potential ministry candidates. These novice preachers would often move into the pastor‘s own home and live with the “master” preacher in an apprenticeship relationship.

Over the last three decades, theological educators led by Edward Farley have recognized the lack of intentional development of the qualities needed for ministerial leadership in the broader seminary curriculum. Students who left theological seminaries were often ill-prepared for effective congregational ministry. The influential Murdock Report in 1994 recognized the gap was not predominantly in intellectual and academic abilities but in the student‘s lack of spirituality, relational skills, godly character, and the ability to successfully minister in the realities of congregational life. Effective mentoring offers a proven method to overcome these deficiencies.

Mentoring is an intentional and intensely relational investment of an experienced practitioner into the life of another person endeavoring to succeed in the same arena of life. Margo Murray in Beyond the Myths and Magic of Mentoring simply defines mentoring as “a deliberate pairing of a more skilled or experienced person with a lesser skilled or experienced one, with the agreed upon goal of having the lesser skilled person grow and develop specific competencies.”

From the Christian point of view, the mentor provides a relational environment of grace which the Holy Spirit can use to shape and equip another for life and ministry. Such relationships are powerful. Apart from the influence of one‘s parents and marriage partner, a mentor can have the most influence in life to change another person. Paul Stanley and Robert Clinton in their influential book, Connecting, define mentoring as “a relational experience in which one person empowers another by sharing God-given resources.” Therefore mentoring is a dynamic relationship of trust in which one person enables another to maximize the grace of God. It has a sound biblical and theological basis with Jesus as the ultimate model.

Mentoring has a wide range of definitions, but at the core of the concept is the idea of investment of time and energy. “Mentoring is much more expensive than simply teaching and/or training. It is investing time and prayer. It is building relationships and investing emotionally in the transfer of values, skills, and attitudes” (Ted Engstrom, The Fine Art of Mentoring, p.73).

The mentoring relationship acts as a vehicle for personal growth and development; the stronger the relationship, the greater the possible empowerment. The key is a more experienced person explaining and modeling what he or she has learned in a way to prepare the learner for future success. This is the heart of our model. Humans learn critical skills, values, and behaviors directly from others whom they look up to and admire in real life contexts. Experienced and seasoned ministers intentionally build relationships with minister-trainees. Therefore, the Mentored Ministry program seeks to link mature pastors and Christian leaders with students in long-term mentoring relationships (2-3 years). Mentoring is not something that can be done in a week or a semester. As Randy MacFarland puts it, ?There is no short-cut for equipping church and ministry leaders to become theologically astute, godly in character and highly competent for mobilizing ministry.”

The above introduction provides a framework to understand the rationale behind the Mentored Ministry program. Undoubtedly, as a student or prospective mentor you have a lot of questions about this process. However, prior to the discussion on the specific aspects of the program, we encourage the students and the mentors to become acquainted with the history of the seminary and the theological and educational principles which guide the Charlotte campus of Gordon-Conwell Theological Seminary. The next part of this introduction will provide you with this needed information.

“Mentoring is a brain to pick, an ear to listen, and a push in the right direction!