The Women’s Council of Gordon-Conwell Theological Seminary was established in 1928. Its first luncheon was held on January 24, 1928, at the Copley Plaza Hotel in Boston with 100 women attending.

The following page taken from the 1929 school yearbook, the Hypernikon (p. 50), features the Council officers for that year. Isabel Warwick Wood, academic dean, served as the first chair of Women’s Council. By the end of its first year, the Council had 195 dues paying members. 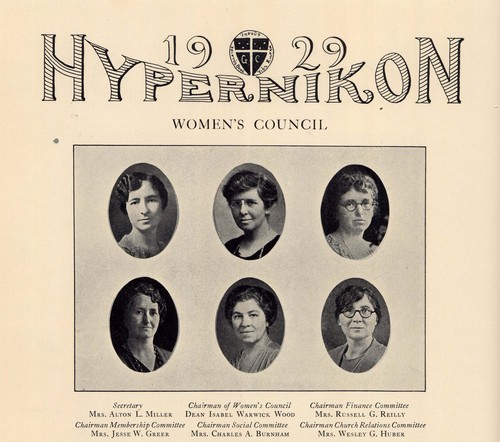 According to the Council by-laws, “The purpose of this organization shall be to stimulate interest in Gordon-Conwell Theological Seminary. The Council shall provide opportunities for fellowship among women who share an interest in the Seminary and for special projects which shall serve the Seminary. It shall also bring about a closer affiliation between the Seminary and the churches represented by the membership.”

Over the years the Council has continued to evolve and change. Records indicate that by 1961, there were 39 women appointed to either the “Board of Directors” or one of the six planning committees. In the early years, money was raised for a variety of campus improvement including “furnishing” 14 student dorm rooms and providing a small kitchenette for the residence halls. The Council also hosted receptions for new students and graduates.

One year students all received subscriptions to the Saturday Evening Post, courtesy of Women’s Council. In 1964 Women’s Council hosted a fundraising event at the New England Life Insurance Hall in Boston featuring two leading soloists from the New York Opera Company. As a result of the concert, the Council purchased a Chickering grand piano, in ebony finish, which was delivered to the campus by the Steinway Company.

In 2018, the Women’s Council celebrated its 90th Anniversary with a series of special events.

Add your call to action