Here’s a short excerpt from the World Christian Encyclopedia, 3rd edition (Edinburgh University Press) on Northern America. This comes from the 32-page full-color Global Overview which is available for purchase and download at https://edinburghuniversitypress.com/book-world-christian-encyclopedia-hb.html.

Religion in Northern America changed substantially over the 20th century. The continent was 97.1% Christian in 1900 and fell to 72.6% by 2020. Two main trends over the century were responsible for this decline. First, various forms of secularization have increased the number of nonreligious (atheists and agnostics) on the continent, who grew from just over one million in 1900 to more than 75 million in 2020. Canada was hit the hardest by this trend, with its Christian percentage dropping more than 30 percentage points in 120 years (from 98% to 62.5%). A second trend is the impact of immigration. Large numbers of Muslims, Buddhists, and Hindus moved to Northern America, especially in the latter half of the 20th century. Muslims grew to over six million, Buddhists to five million and Hindus to 2.1 million. At the same time, smaller religious communities increased rapidly, many growing at two or three times general population growth rates per year by the end of the century. As a result, Northern America is a very diverse continent. In Canada, for example, the number of Sikhs has increased steadily in the 21st century, now at half a million, and many are very prominent in Canadian society, especially in politics. 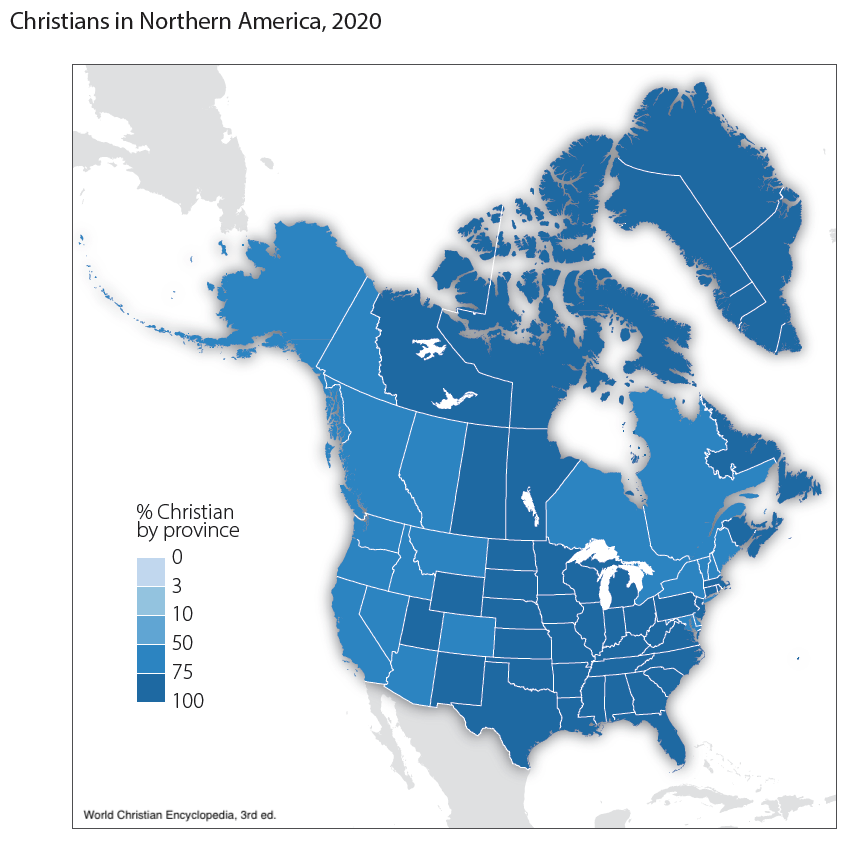 Immigration plays a significant role in the changing demographics of the region regarding Christianity in the 21st century. The vast majority of immigrants coming to the United States, for example, are Christians from Latin America, Asia, and Africa. With the rapid increase of agnostics and atheists in the USA, it is the nation’s primarily Christian immigrants (both documented and undocumented) who are holding the country’s Christian percentage relatively steady. Christianity in Northern America has declined in percentage and has experienced profound changes in its internal composition. Protestants, who were the majority in 1900, have declined dramatically as a proportion of all Christians (falling from over 60% to only 26%). Catholics have been increasing, largely the result of immigrants from Latin America, while Independents have made the largest gains, becoming the second-largest of the Christian traditions in the region in the latter part of the 20th century. Independents also grew in size over the period; the largest such group is the Church of Jesus Christ of Latter-day Saints, headquartered in Salt Lake City, Utah, in the USA. Northern American Independent churches often arose out of dissatisfaction with other churches, usually stemming from disagreements over doctrine. Historical drivers included the Pentecostal/Charismatic movement, the fundamentalist/modernist controversy and what constitutes the “true church”, while more recent motivators include differences over women’s rights and roles in the church, abortion, and same-sex relations.