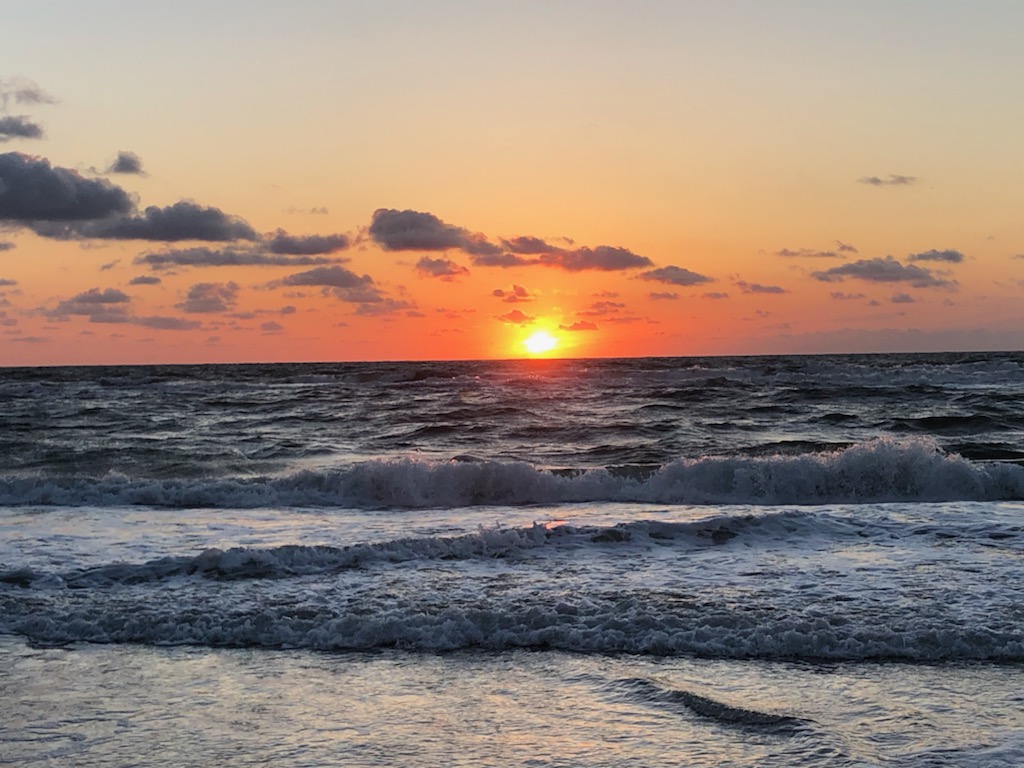 For eight days in a row in late May, I walked 7 blocks east (stopping for a dark roast coffee) to the beach. I left about 5:30 am with a beach chair, Bible, and the Philokalia.[1] After grabbing my coffee (6 days with the required mask, but on the last two days I saw Florida smiles), I walked a few more blocks, set up my chair and put my Bible and Philokalia on the chair. Then I walked one mile north to the wharf, and walked back, collecting unusual shells along the way.

With seashell-filled pockets, I would sit down in the chair and look east with anticipation. Others were arriving to see the miracle. Elderly men, walking slowly would look over their shoulder, glancing to make sure they did not miss the indescribable: sunrise. A couple of women walked briskly near the water’s edge. A mother with an early riser son was there: he ran, she smiled, giggled, and ran with him. A young couple who probably spent the night on their towels, slowly came to and looked eastward.

Joggers, shell pickers, young couples, speed walkers and yoga enthusiasts. It was just a sunrise. It happens every day. Yes, but each and every day is a unique act of creation. Each day I was drawn in, away from my anxieties and responsibilities, and into the miracle of creation. We all knew it would happen, but we were always surprised that it was so remarkable each morning. Am I just old, or am I just now, finally beginning to humble myself and enter into God’s wonder?

It was a rhythm that was restorative: 4 blocks, coffee, smiles, three blocks, chair, one mile down, talk to the fishermen, one mile back, sit, and watch. Read the Bible, read the early church saints, meditate, and then walk another two miles as I prayed.

I needed this restoration. To be “restored” can be described as being re-created. God’s creation calls us, as it called Jesus, to be restored.

Jesus retreated by himself and with his disciples. In both types of re-creation, the focus was on disengaging from the crowds and from the ministry, to be alone, or with a small group, in God’s creation. Even in Jesus’ temptation in the wilderness, it was a moment immersed in creation. “At once the Spirit sent [Jesus] out into the desert, and he was in the desert forty days, being tempted by Satan. He was with the wild animals, and angels attended him” (Mark 1:12). What a remarkable sentence. The Holy Spirit sent him into the desert where he was tempted, he was with wild animals, and angels attended him. Being re-created, often involves facing our demons, alone, with only the Holy Spirit and the angels to guide, protect, and preserve us. Jesus, immediately after feeding the 5,000 “… made the disciples get into the boat and go on ahead of him to the other side, while he dismissed the crowd. After he had dismissed them, he went up on a mountainside by himself to pray. When evening came, he was there alone” (Matt.14:22-23).

Spiritual ministry depletes us of energy, creativity, and centeredness.

Pastors know this well. Delivering two or three sermons on a Sunday, dealing with suffering and death, even casting out demons depletes us. God calls us away to be re-created after such times.

One of the major reasons for coming away into God’s creation is because of the cacophony of voices, sounds, and “opportunities,” calling to us from the internet and our “friends” on social media. The image of Sirens calling Odysseus to destruction comes to mind. In some sense, retreat can be seen as a type of protection. “Then, because so many people were coming and going that they did not even have a chance to eat, he said to them, ‘Come with me by yourselves to a quiet place and get some rest.’ So they went away by themselves in a boat to a solitary place” (Mk. 6:30-32).

It is not selfish to turn away from people and turn to God’s creation. It is a fully human thing to do. I almost waited too long. I knew I needed restoration and communion with God in his world, but by the time I actually stepped away from the crowds and ministry, I was numb and inarticulate.

A recent survey of pastors found that, during this pandemic about 30% are considering retiring or resigning from pastoral ministry. Church members are hurting but so are their pastors. Being attentive to our souls will require patience with others, and reconnecting with who we are as God’s creatures.

Be still my soul.