Here’s a short excerpt from the World Christian Encyclopedia, 3rd edition (Edinburgh University Press) on the Catholic church in global perspective. This comes from the 32-page full-color Global Overview which is available for download at https://edinburghuniversitypress.com/book-world-christian-encyclopedia-hb.html.

Catholicism experienced a substantial increase of adherents in the 20th century. There were nearly 266 million Catholics worldwide in 1900, and this grew to well over 1.2 billion by 2020. Catholics increased at a rate of 1.36% per year over the century, a little faster than global population, faster than either Protestants or Orthodox but a long way behind Independents. However, although Catholicism has grown – especially in Africa – Catholics are slowly declining as a proportion of all Christians. In 1970, Catholics were 54% of all Christians but in 2020 they are 49%. Individuals are leaving Catholic churches in Europe and Latin America usually for agnosticism or Protestantism, respectively. The significant increase of Independent Christianity worldwide has also been largely at the expense of Catholicism, which has been over half of World Christianity for many decades.

At the beginning of the 20th century, the two countries with the largest Catholic populations were France and Italy, with over 38 million adherents each. In 2020 the top two countries are Brazil and Mexico, with 150 million and 116 million, respectively. This reflects not only the global expansion of Catholicism but also the continued shift of World Christianity southward. Africa experienced the greatest annual growth rate of Catholics during the 20th century (4.32%), which was double the general population growth (2.05%). Brazil saw remarkable growth of its Catholic population, from only about 17 million church members in 1900 to more than 143 million in 2000. Some of the fastest Catholic growth rates in the 21st century (2000–20) are found in Africa: the Democratic Republic of the Congo (3.0% annual growth), Nigeria (2.6%), Uganda (3.3%) and Angola (3.2%). Meanwhile, Catholicism continues to decline or remain stagnant in its historical homelands, such as Italy, Spain, France and Poland. 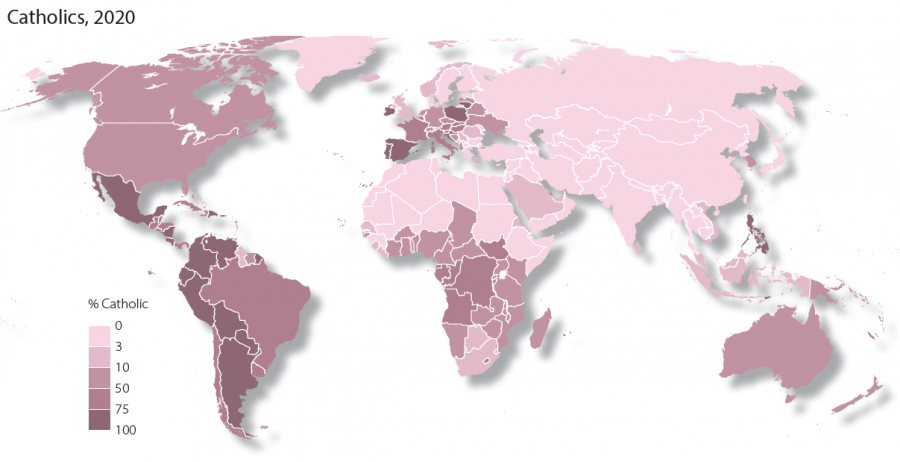 One of the most significant challenges for the Catholic Church in the early 21st century relates to sex scandals. Starting in the late 1980s, accusations began to mount against priests for the sexual exploitation of young people, often lasting for decades. Publicity of these accusations increased in the 1990s and became widespread in the early 2000s, especially in Europe, the United States, Australia and Chile. Australian Catholic leaders in 1996 were some of the earliest to decry the church’s handling of cases. Ireland’s crisis was particularly high-profile, with Catholic clerics involved in sexual relations and widespread abuse of children in Catholic-run organizations. The crisis in the United States reached a tipping point in 2002 with a series of articles appearing in The Boston Globe and again in 2018 in Pennsylvania, with reports of more than 300 priests abusing over 1,000 children over a 70-year period. In many of these cases, priests were moved to other parishes and abuse was covered up.

Many new vocations in the Global North are now filled by Catholics from the South. In 2015, there were 670,330 religious sisters and 54,229 religious brothers worldwide. Both figures are down significantly compared to 1970: 1,004,304 million religious sisters and 79,408 religious brothers. Yet, the church runs over 95,000 Catholic elementary and 47,000 Catholic secondary schools worldwide, in addition to over 5,000 hospitals and nearly 10,000 orphanages. These figures have increased substantially since 1970. Catholic leadership is also shifting to the South. In addition to Pope Francis, new cardinals and bishops are also increasingly from Latin America, Africa, Asia and Oceania. In addition, the Catholic Charismatic movement has found new impetus in countries like Brazil, Nigeria and the Philippines. As a polycentric Catholicism continues to emerge, missionaries and religious orders will increasingly come from these locations to transform a historic European institution.