Here’s a short excerpt from the World Christian Encyclopedia, 3rd edition (Edinburgh University Press) on Christianity in Asia. This comes from the 32-page full-color Global Overview which is available for purchase and download here. 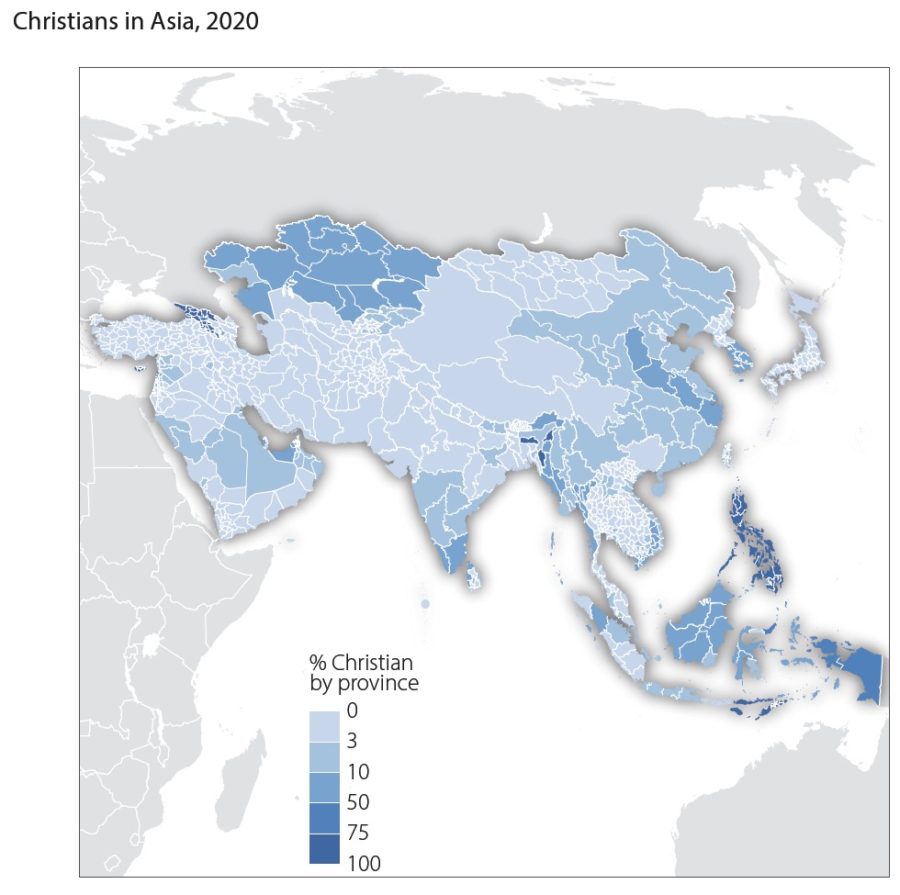 In the 19th and early 20th centuries, Asia was an important destination of Western missionaries, many who believed in the superiority of Asian societies and their eventual acceptance of Christianity and Western civilization. Contrary to most expectations, however, Asia became the most nonreligious continent in the 20th century. This was due largely to the spread of Communist regimes whose policies prohibited religions and propagated atheistic ideology. Agnostics and atheists grew the fastest, averaging nearly 10% per year over the entire century. In 1900, the nonreligious numbered fewer than 55,000 but by 2020 more than 640 million, just under 14% of Asia’s population.

Changes within Asian Christianity have been equally profound. The majority of Christians in 1900 were Catholic and Orthodox, mainly in Western Asia, the Indian subcontinent and the Philippines. By 2020 the balance had shifted to Independent churches, especially house churches in China. Anglicans (absorbed into the Protestant union churches in India and Pakistan) have declined in proportion to the population, whereas Orthodox churches have consistently decreased through immigration to the West and the North. Catholics and Protestants have fared better, as their mission activities have been effective in encouraging indigenous populations to accept Christianity. The fastest current growth rates are found in South Asia and Southeastern Asia.

Mongolia and Nepal are notable for significant Christian growth since 1990 and represent some of the newest expressions of Christianity in the world. Christians in these countries are grappling with what it means to be both Mongolian or Nepalese and authentically Christian. Cambodia has likewise experienced substantial growth since 1990. In both Nepal and Cambodia this is due to vigorous missions and evangelistic activities, along with relatively loose state restrictions.

The highest growth rate among Christian families from 1970–2020 (15.4% p.a.) was among the house churches, particularly in China. Though this growth has slowed considerably since 2015, 56 million Christians still worship in house churches in Asia. Smaller groups in Asia, such as the Church of Jesus Christ of Latter-day Saints and Restorationist churches, experienced very high growth rates from 1970 to 2020. However, some larger groups such as United Churches (for example the Church of South India and Church of North India) have also grown significantly since 1970.

Asian Christianity is extremely diverse. In India, for example, Christian presence is as old as Christianity itself, with the Apostle Thomas visiting Kerala as early as 52 CE. But the Indian subcontinent is also home to numerous creative contextualization movements among Hindus, such as Christian ashrams and Hindu believers in Christ.

While Christianity has grown rapidly in three of the four regions of Asia, Western Asia has seen a steady decline, from 23% of the population in 1900 to 5.4% by 2020. This is largely the result of emigration, and the exodus is still taking place from some parts of the region. In Iraq and Syria, historic Catholic and Orthodox populations have suffered terribly at the hands of violent religious extremism and Western military involvement. Israel, Palestine and Turkey have also been heavily affected, as the religious and ethnic conflicts in the past century prompted many minority Christians to leave these countries. Over all, the statistical centre of gravity of Christianity continues to move East as a result of the rapid growth of churches in China, where Christians number more than 100 million and are found in both registered churches and unregistered churches (made up of Protestants, Catholics and Independents), all of which have experienced growth.