Here’s a short excerpt from the World Christian Encyclopedia, 3rd edition (Edinburgh University Press) on Europe. This comes from the 32-page full-color Global Overview which is available for purchase and download at https://edinburghuniversitypress.com/book-world-christian-encyclopedia-hb.html.

Europe became substantially more diverse in its religious makeup over the course of the 20th century. In 1900 nearly 95% of Europe’s population professed some form of Christianity; in 2020 the continent is 76% Christian. The main gains were made by agnostics and atheists, who together make up more than 15% of Europe’s population (from 0.4% in 1900). The other gains were made by Muslims, whose 9 million members in 1900 grew to more than 53 million by 2020, largely through migration from Northern Africa and Western Asia. The religious makeup of Europe has been changing due to the arrival of asylum seekers, refugees, and other kinds of migrants from the Middle East, South and Southeast Asia, Africa and elsewhere, causing an increase in the number of Muslims, Hindus, and Buddhists. The dominance of White (Christian) identity has been openly challenged, testing Europe’s progressive values. Several countries experienced a spike in xenophobia at the beginning of the refugee crisis in 2015, which has disproportionately impacted Muslims. 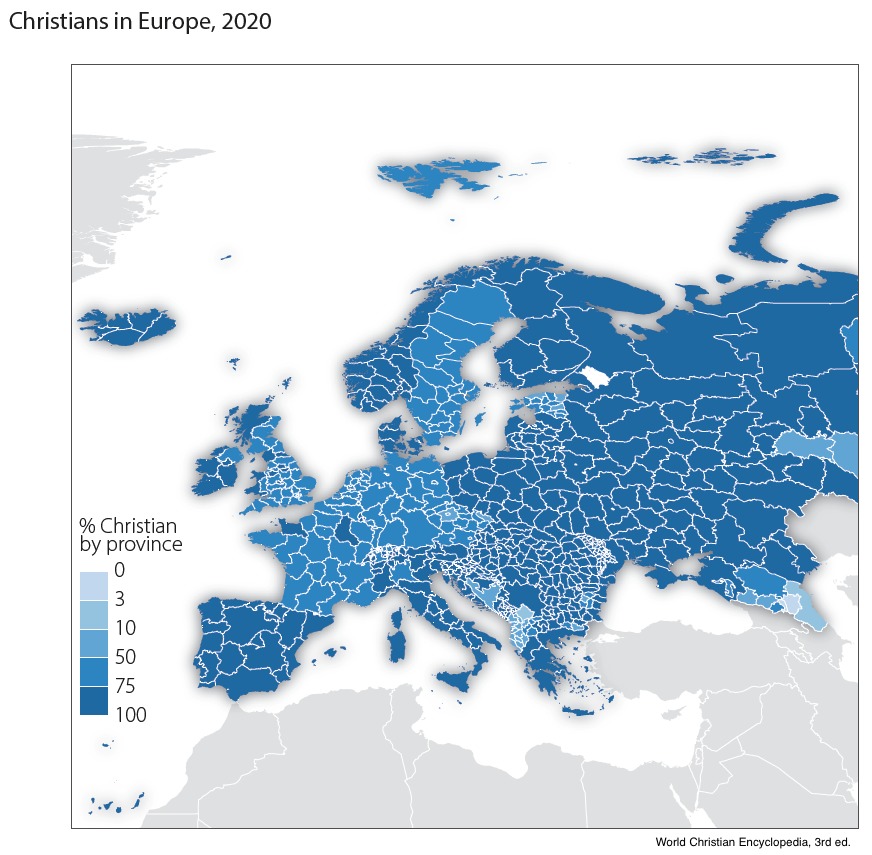 As both the number of Christians and their share of the European population has been steadily declining, its composition also has been changing. First, although Catholics and Orthodox still make up over 80% of all Christians in Europe, Independents are the fastest-growing tradition both over the century and between 2000 and 2020. Second, immigration has impacted Christian communities; some of the largest congregations in Europe today are ethnic minority churches. In continental Europe and its four regions, Christianity is declining largely through religious switching, mainly to agnosticism and atheism an evidence of secularization, and deaths, while it is increasing through births (those born into Christian families) and immigration. Emigration plays only a small role in Christianity’s decline, while conversions appear to do little to invigorate Christianity.

Despite the declining presence of Christians in Europe, the continent is the home of “headquarters” of major Christian families such as Catholics (Rome), Anglicans (Canterbury), Russian Orthodox (Moscow), Lutherans (Geneva) and several others. European venues are frequently chosen for global meetings of Christian organizations. European Christians are also active in both mission and social justice in other parts of the world, with long legacies from Ireland and Spain for Catholics and from Germany and Scandinavia for Protestants. European Christian development agencies are also numerous and have played a significant role in global socioeconomic, health and gender initiatives such as the Sustainable Development Goals of the United Nations.