Here’s a short excerpt from the World Christian Encyclopedia, 3rd edition (Edinburgh University Press) on Latin America. This comes from the 32-page full-color Global Overview which is available for purchase and download at https://edinburghuniversitypress.com/book-world-christian-encyclopedia-hb.html.

Although the overall percentage of Christians changed little in Latin America over the 20th century, the internal composition of Christianity has changed significantly. Catholics remain the largest tradition, but Protestants (evangélicos) and Independents have been rapidly increasing their shares of Christianity in the continent. This includes Protestant denominations such as Presbyterians in Guatemala, Pentecostal groups such as the Assemblies of God in Brazil, and Independent Charismatic churches such as the Methodist Pentecostal Church and the Evangelical Pentecostal Church in Chile. Other Independent churches have also been growing rapidly, especially the Church of Jesus Christ of Latter-day Saints and Jehovah’s Witnesses in Brazil and Mexico. Finally, the Orthodox community has experienced growth in Chile and has the third-fastest growth rate among churches in Latin America today. 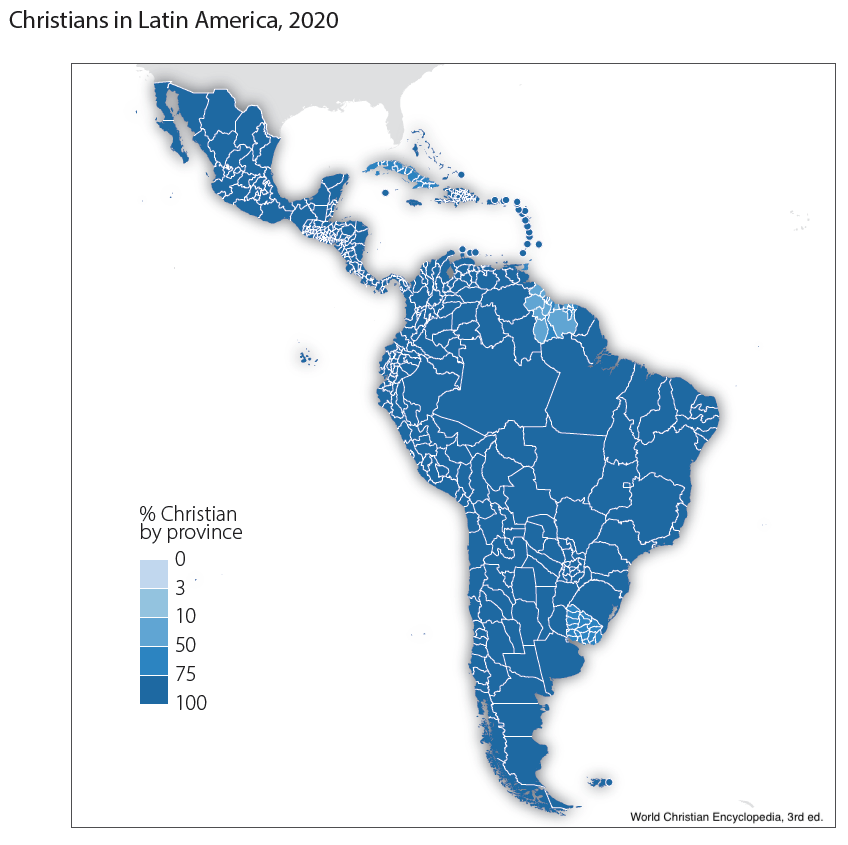 Some Christian families in Latin America are experiencing continual growth, even though the majority of Latin Americans are already Christians. In some cases, the increase is clearly the result of Catholics joining Protestant, Independent, or Pentecostal churches. The Charismatic movement within the Catholic Church continues to grow in Brazil, Mexico, Colombia, Chile, Argentina and other countries. Indeed, the Catholic Charismatic movement has grown significantly over the last half-century. The movement began in the late 1960s in the United States and Colombia and quickly spread throughout Latin America. In 2020 the world’s largest Catholic Charismatic community is in Brazil. Many Pentecostal/Charismatic movements have connections to the United States, such as in Peru, where roughly 70% of today’s Pentecostal churches trace their origins to the original USA Assemblies of God and to the groups that separated from it and then followed the same denominational structure. At the same time, Latin American Pentecostalism is very diverse, ranging from Classical Pentecostalism to Independent Pentecostal movements that are much closer to Catholicism in practice. There are also numerous networked Charismatic groups and ministries under the leadership and authority of apostles. Christians in Latin America face a wide range of challenges at the beginning of the 21st century.

Major corruption scandals plague governments and businesses. Christian involvement in politics ranges from pastors and priests running for public office to eschewing politics altogether. Drug and gang violence is very real and severely impacts the churches. For example, in El Salvador, affiliation with Protestant Evangelical Christianity provides many people safety from violent gangs. Often joining an Evangelical church is the only safe alternative to joining a gang – as well as the only safe way to leave a gang – especially for young men and boys. Such challenges have also given way to a variety of fruitful ministries through which churches – Catholic, Independent and Protestant – have the opportunity to serve their communities, such as prison ministries and peace-building efforts.

Christians in Latin America have also been engaged in overseas Christian mission. Catholics have been sending missionaries for the longest period, including brothers and sisters in both religious and secular orders assigned to countries in Northern America, Europe, Africa and Asia. Protestants and Independents are also sending missionaries, with Brazil as a leading sending country. Many of these missionaries got their start through diaspora communities, ministering among their own people, only later engaging people of other languages and cultures. Deliberate mission sending to Muslims, Buddhists, and Hindus is a newer feature of Latin American mission outreach.