Ever since the 1st century, Christians have never spoken just one language, represented just one ethnicity or lived in just one place. Translatability is at the core of Christian history, theology and experience; God became ‘translated’ into human form in Jesus Christ. In addition, Christianity’s primary source documents are in a language different from its founder (Koine Greek vs Aramaic). Due to its translatability, Christianity could move out of its Jewish context and translate itself into endless cultural and linguistic forms, a process that continues today, allowing for a vast amount of diversity within the religion. As a result, all peoples, languages and cultures have a unique contribution to make to World Christianity. New cities, peoples and languages will increasingly represent Christianity, as Christianity continues to shift to the Global South.

The shift of Christianity to the Global South is nowhere more apparent than in the rise of languages such as Spanish (Latin America), Portuguese (Brazil) and Chinese (now 5th in the number of Christians), while major European languages (German, French, Italian) decline. Christians are mother-tongue speakers of 82% of the world’s languages, compared with Muslims, the next highest, speaking 25% of the world’s languages. Tagalog, from the Philippines, is now 7th, having recently passed Polish and German, and almost certainly will pass French soon. In languages 11-20 one finds Amharic (Ethiopia), Korean, Yoruba and Igbo (Nigeria), Cebuano (Philippines), and Tamil and Malayalam (India).

In 1900, 82% of the world’s Christian population lived in the Global North, meaning they spoke mainly European languages such as Russian, English, Spanish and German. Although these languages are still predominantly Christian (Russian 91.8%, English 72.1%, Spanish 93.7%, German 68.3%), more languages from around the world are becoming largely Christian languages or have greater numbers of speakers who are Christians. In 1900 it would have seemed amazing that languages such as Igbo 97.9% (Western Africa) and Zulu 91.8% (Southern Africa) would become majority Christian languages, yet in 2020 they are. 73% of the global Christian population is represented by the top 50 languages. Diversity is also indicated by in the sheer number of languages spoken.

The southern shift of Christianity also suggests that the dominant languages of Christianity will shift from North to South. Already by 1980 Spanish (primarily in its Latin American forms) was the leading language of church membership in the world. However, Christians in Africa, Asia and Latin America worship in numerous other languages. Thus, translation of the Christian message has become increasingly important. Northern and Western scholars, no longer at the Christian center of gravity, should also recognize and seriously consider scholarship in non-English and non-European languages. Consequently, there is a great need for Christian scholarship in Southern languages to be translated into English, French, German, Italian and other languages of the Global North. Language lies at the heart of the Christian message and is the key to the continued vitality of truly cross-cultural Christian experiences. 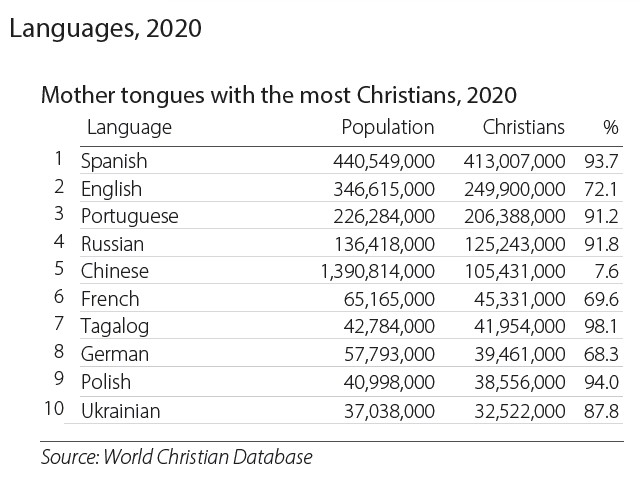