Earlier this month, I had the privilege of listening to First Nations theologian Terry LeBlanc speak to the American Society of Missiology about Western Christianity’s assimilation of indigenous cultures in the Americas. Far from what was intended in the New Testament, cultural assimilation, as LeBlanc notes, counteracted the Acts 15 council’s instruction to the church to put as few obstacles to the gospel as possible in introducing new peoples to the message. Specifically, Gentile peoples need not become Jews to follow Christ. Effectively, this biblical mandate, consistent from Genesis to Revelation, was an invitation to become God’s people, saying, “When you join us, your culture brings new gifts to our community.” But this way of thinking was undermined as Gentile Christians sidled up to the powers in Rome. Soon, Christians were saying, “When you join us, you need to become as we are (assimilate).” Of course, it is not difficult to see that once Christianity was hyper-contextualized to Rome and then to Europe for a thousand years, this tendency hardened and then accompanied Christians when they made their way to the New World.

LeBlanc’s message, as it related to his own First Nations’ history, was especially poignant in the wake of the discovery of the bodies of over 200 indigenous children found in unmarked graves outside a residential school in Kamloops, and then another discovery of unmarked graves of another 751 people, mainly children, on the site of a former boarding school in Saskatchewan. According to the New York Times, “Indigenous children in many parts of Canada were forced to attend residential schools, often far from their communities. Most were operated by churches, and all of them banned the use of Indigenous languages and Indigenous cultural practices, often through violence. Disease as well as sexual, physical and emotional abuse were widespread.” These sentences should mortify every Christian, as this is clearly the polar opposite of what Acts 15 teaches us. We must celebrate indigenous languages and cultural practices. As a matter of fact, this defines who we are. But if Christians take on one culture’s practices (in this case Western superiority) as a guiding, universal principle, terrible consequences are likely to follow.

At this same meeting, ASM awarded authors Mark Charles and Soong-Chan Rah a Best Book of 2019 award for their Unsettling Truths: the Ongoing, Dehumanizing Legacy of the Doctrine of Discovery, which opens with the line, “You cannot discover lands already inhabited.” In contrast, beyond claiming the discovery of the inhabited American continent, Europeans claimed the absolute right to rule it. These claims are rooted in the Doctrine of Discovery, a set of legal principles based on the idea that Europeans (Whites) were a “higher” race and more capable of ruling lands that they “discovered.” This lie of White supremacy was at the heart of what the authors refer to as “a dysfunctional theological imagination that shaped the European colonial settler worldview.” (p. 15) This worldview resulted in the enslavement of Africans and the genocide of Native Americans. Using the theological perversion of White supremacy, settler colonialists diminished the humanity of Native Americans and Black slaves, took their land, and continued subjugating people of color.

One of the cardinal values of missiology and World Christianity, as articulated in Acts 15, is the indigeneity of the Christian church; that is, the unique ways people around the world express their dedication to Jesus in their respective cultures. The incarnation of Christ, translated into one culture after another, resulted in a beautiful, global diversity (see President Scott Sunquist’s blog for more). However, LeBlanc recognized that the European mission to First Nations and Native Americans violated the Acts 15 principle. Instead of celebrating indigenous culture, the European mission erased it.

Today, native peoples are lamenting the loss of their cultures in the global Christian family. Special gifts, unique to those peoples, were lost when European Christians, blinded by power, and in violation of the biblical mandate, swept these away. Even today, as LeBlanc reminded us, white Christians are in a hurry to put these atrocities behind them. Western governments have been slow to take responsibility and have offered tepid solutions to this deep-seated injustice.

Some time ago, one of LeBlanc’s white Canadian colleagues asked him, “Isn’t colonial Christianity something in the past?”

The revelations at Kamloops and Saskatchewan require that every Christian stand with indigenous communities for restorative justice. In the history of Christian mission there is no more repugnant image than a Christian teacher striking an indigenous pupil when they speak their native tongue. Our commitment to Acts 15 means that every indigenous person and their culture is made in the image of God. 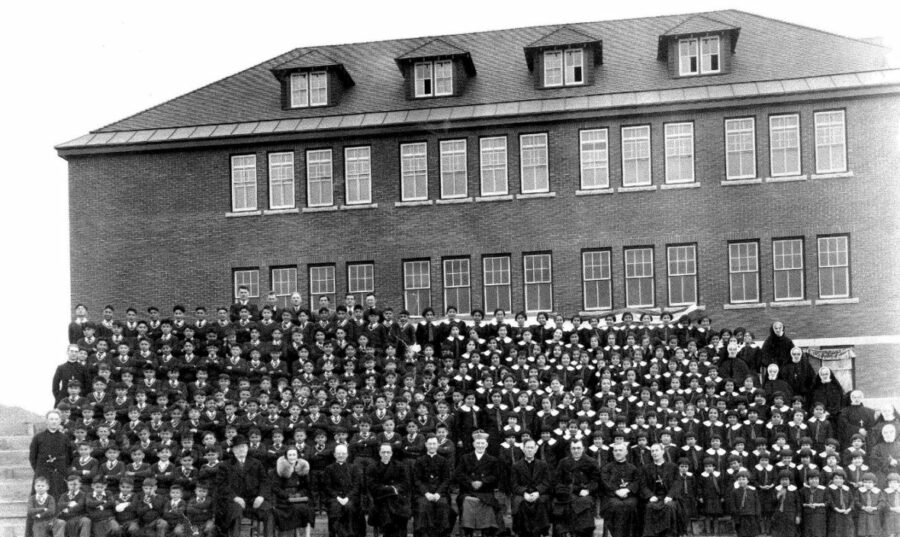 Photo caption and credit: A photo from April 4, 1937, of students, administration, and teaching staff at Kamloops residential school. The photo is from the Quebec archives of the Oblates of Mary Immaculate. (National Centre for Truth and Reconciliation) https://newsinteractives.cbc.ca/longform/kamloops-residential-school-children-dead