RESEARCH ASSISTANT, CENTER FOR THE STUDY OF GLOBAL CHRISTIANITY

It’s Christmas Eve – the evening of January 6th. Dusk has fallen and the stores in towns have closed early. But even though it’s evening, the streets have gone white with hordes of people dressed in traditional Netela clothing. They shuffle their feet, somber faces illuminated only by the dim candlelight in their hands. It almost looks like they glow as they walk slowly and sing praises. A hush falls upon the town as the children watch. This goes on for many hours as participants make slow concentric circles around the church in the center of town. The priest begins Holy Communion and many come forward to receive the elements, as they have for many generations. This lasts until late in the night before service ends and everyone disperses to their homes, ready to start festivities amongst the townspeople in the morning. Timkat, the celebration of Jesus’s baptism, is only 12 days away and everyone launches into the preparing for the next procession to come.

This is the awe-striking Christmas tradition of the Ethiopian Orthodox Church called “Ganna,” an Amharic word that finds its origin in the Greek word meaning “birth” and continues today after thousands of years. Ethiopia is 38% Christian, and of this number, about 36.5% are Orthodox. The Ethiopian Orthodox Church has been around for over a thousand years, and Ethiopia is one of the only two countries in Africa to not have been colonized by European powers in the 20th century. 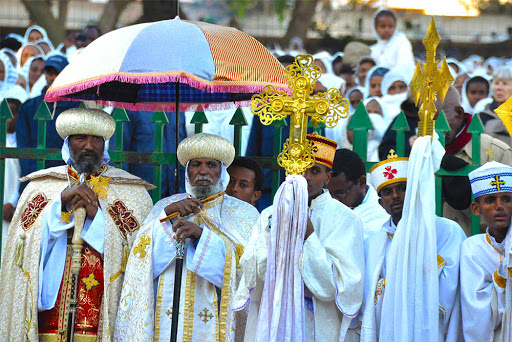 traditions. To start, Ethiopia celebrates Christmas on January 7th, not December 25th; this is because the Ethiopian calendar has different months and Christmas lands on the 29th of Tahsas. Many go to church on Christmas Day after taking part in an Advent fast called “The Fast of the Prophets,” which starts on November 25 and occurs throughout the 43 days before January 7th. Service for Christmas starts at 6:00PM on Christmas Eve and ends nearly nine hours later, around 3:00AM on Christmas morning. People traditionally go to mass wearing white, but for those who hold more strictly to tradition, they wear netela, which is traditional white cloth with bright stripes at the end of the fabric that is draped across the body. 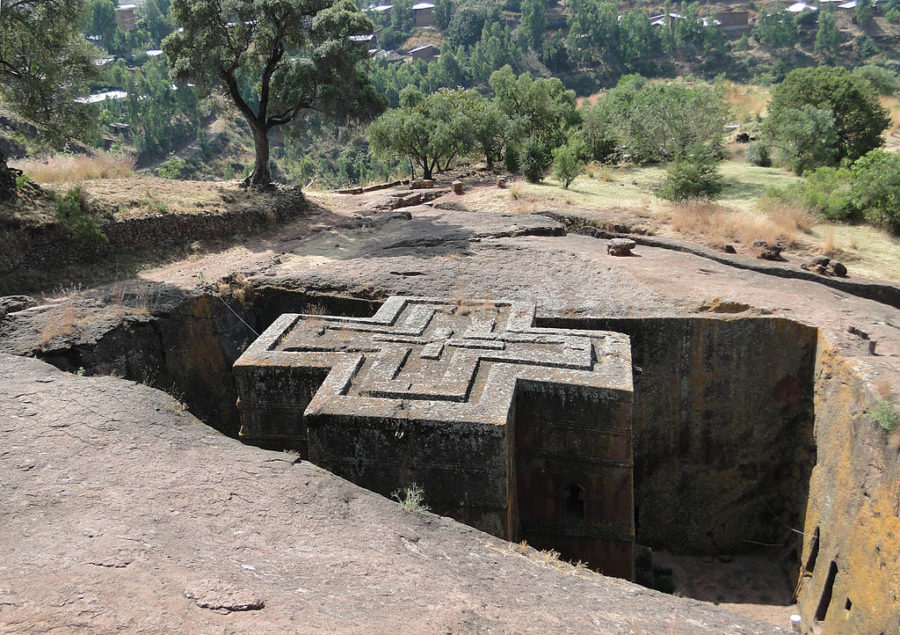 Unlike much of the flimsy, commercialized Christmas cheer we can find in the United States, Christmas in Ethiopia is both somber and wondrous and a deeply religious tradition. Worship is the core of Ethiopian Orthodox tradition, as the centerpiece of Ganna tradition lies in the dawn service. During the dawn service, people often form circles and walk around the church in somber procession in candlelight, with the priests serving communion in the innermost circle. The holiest procession is held in Lalibela, considered their Holy City or Jerusalem. The thirteen churches in Lalibela are carved out of the rock, dating back to the 12th century; they are cut downwards into the rock, giving the impression that they are underground. Thousands of pilgrims from around the country gather to attend church service here at dawn, with tent cities designated specifically for them on this particularly wondrous occasion.

I’m a New Yorker and it’s easy to think of Christmas to be about everything but Jesus. My family’s traditions include visiting the sky-high Christmas tree at Rockefeller Center, with steaming hot chocolate, marshmallows, and peppermint for our knobby hands that turn red with cold. Christmas Eve is the last sales day for vendors at Union Square’s holiday market; they stay open late that night, complete with twinkling lights and wreaths lining every booth. I think of the elaborate decorations that adorn the buildings on Fifth Avenue, as the streets bustle with shoppers eager to buy last-minute gifts for their loved ones. In New York, the idea of a Christmas Eve service is often something of an afterthought in a poor attempt to remember what Christmas is truly about. But for the Ethiopian Orthodox Church, who has dutifully sustained this sacred tradition for more than a millennium, there could not possibly be another reason. Everything revolves around the centerpiece of worshipping the birth and life of Christ. Churches in the West can learn from these ancient traditions and the people that have upheld them for generations. Let us honor the customs of our brothers and sisters, look to our family and friends, and maybe wish one another a “Melkam Gena!” instead of “Merry Christmas!” this year.

We especially remember Ethiopia this holiday season as people in the Tigray region continue to experience war, violence, displacement, and reported massacres of civilians. Lord, have mercy.