Here’s a short excerpt from the World Christian Encyclopedia, 3rd edition (Edinburgh University Press) on the Orthodox churches in global perspective. This comes from the 32-page full-color Global Overview which is available for download at https://edinburghuniversitypress.com/book-world-christian-encyclopedia-hb.html.

During its early centuries, Christianity developed in the context of theological disagreements concerning Trinitarian doctrine. The church ultimately divided into Catholicism (Roman and Eastern) and Orthodoxy (Oriental and Eastern) in a series of schisms. These historic splits were not only theological, but also geographical and cultural: Roman Catholicism became the majority in Western Europe, with Latin as its lingua franca, and Oriental (and later Eastern) Orthodoxy grew in the East, with Greek and Syriac as its main ecclesiastical languages. These divisions have continued through the centuries until today.

Orthodoxy is different from the other major Christian traditions because of the close connection between church and ethnicity. The term ‘Orthodox’ refers to members of the Eastern Orthodox and Oriental Orthodox churches, both of whom consider themselves in unbroken continuity with the church founded by the New Testament apostles. Orthodox churches are named for their geographical and linguistic traditions: Russian Orthodox, Ethiopian Orthodox, Coptic Orthodox and so on. Orthodox churches in the Global North have been grappling with what it means to be a church that is no longer tied to a single ethnic group or language because of the realities of migration. English and Spanish have been increasingly used for liturgy and communication as Orthodox parishes become more ethnically and linguistically diverse. 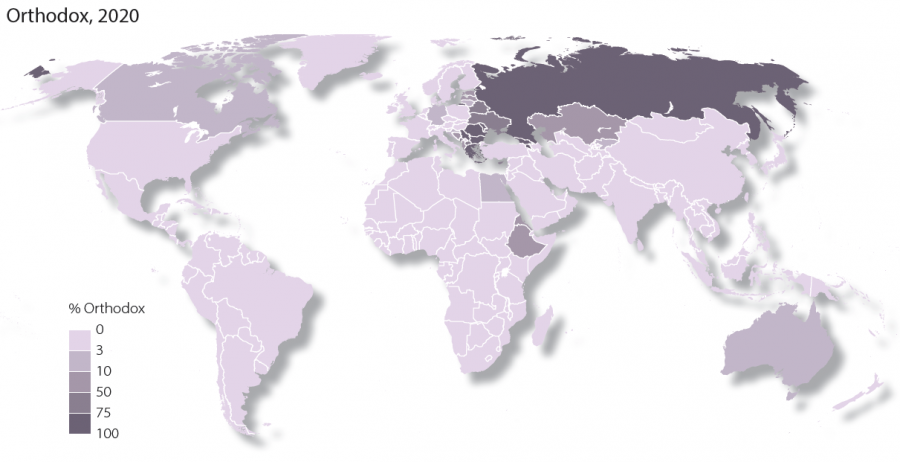 Severely impacted by the Armenian Genocide (1914–23) and 20th-century Communism, Orthodox dropped from 7.2% of the global population in 1900 to 3.7% in 2020 and at the same time, the Orthodox fell from 20.8% of all Christians in 1900 to 11.6% in 2020. The recent story of the Orthodox is further nuanced by their subsequent rebound after the fall of European Communism, their comparatively low birth rates and high death rates and the fact that Orthodoxy tends to be a non-proselytizing tradition. This latter distinction contrasts with the rich history of Orthodox missionaries especially in the 4th–6th centuries and the 9th–11th centuries. Famous Byzantine missionary brothers, Cyril (826–69) and Methodius (815–85), worked among the Slavic peoples to invent the Slavonic alphabet and translate scripture and liturgy into their language. St Innocent of Alaska (1797–1879) founded the Russian Orthodox Missionary Society, which sent personnel all around the world. Communism in the 20th century shifted Orthodox consciousness from thriving to barely surviving under anti-theistic dictatorships that killed many Orthodox, both clergy and lay. Albania, for example, was declared the first atheistic state in 1967, with its Orthodox share of the population dropping from 20% in 1900 to under 5% by 1970. The 21st century has seen a renewed interest in Orthodox mission, contributing to increases in East Africa. Kenya, for example, was home to no Orthodox at the beginning of the 20th century but is now home to 370,000.

Orthodox Christians are the largest major Christian tradition in the Middle East. The countries with the most Orthodox Christians are Egypt (Coptic), Cyprus (Greek) and Syria (Armenian, Greek and Syrian), and each of these communities dates back at least 17 centuries. Emigration, however, has profoundly impacted the Orthodox churches, with their share of the regional population falling from 11.1% in 1900 to only 2.5% in 2020, and likely continuing to 2.1% by 2050. Figures for Eastern Europe show modest growth from 57% Orthodox in 1900 to 61% in 2020. This hides the fact that shortly after 1900 the church went largely underground and only reemerged after the collapse of Communism in the early 1990s.