Here’s a short excerpt from the World Christian Encyclopedia, 3rd edition (Edinburgh University Press) on Pentecostal/Charismatic churches in global perspective. This comes from the 32-page full-color Global Overview which is available for download at https://edinburghuniversitypress.com/book-world-christian-encyclopedia-hb.html.

The Pentecostal/Charismatic movement began at the beginning of the 20th century by a series of revivals on four continents – Asia, Europe, Northern America and Latin America – almost simultaneously. Today, Pentecostals/Charismatics are found in nearly every country of the world and span all Christian traditions and most denominations. As such, they are considered a ‘movement’ within World Christianity. The case for the Pentecostal and Charismatic renewal as a single interconnected phenomenon is made by considering a ‘family resemblance’ among the various kinds of movements that claim to be either Pentecostal or Charismatic. This movement grew from 58 million in 1970 to 635 million in 2020. The Global South is home to 86% of all Pentecostals/ Charismatics in the world.

It is useful to divide the movement into three kinds or types. First, Pentecostals are members of the explicitly Pentecostal denominations, characterized by a new experience of the energizing ministry of the Holy Spirit that many other Christians historically considered to be highly unusual. This is interpreted as a rediscovery of the spiritual gifts of New Testament times and their restoration to ordinary Christian life and ministry. Pentecostal denominations that are part of Protestantism include the Assemblies of God, the International Church of the Foursquare Gospel and the Church of God of Prophecy. Subcategories of Pentecostal denominations include Oneness, Baptistic, Holiness and Apostolic.

Second, Charismatics’ roots go back to early Pentecostalism, but rapid expansion since 1960 (later called the ‘Charismatic renewal’) has made this type larger than Classical Pentecostalism. Charismatics usually describe themselves as having been ‘renewed in the Spirit’ and as experiencing the Spirit’s supernatural and miraculous and energizing power. They remain within, and also form organized renewal groups within, their historical non-Pentecostal denominations (Catholic, Orthodox or Protestant), instead of leaving to join Pentecostal denominations. The largest Charismatic movement today is the Catholic Charismatic renewal, found in significant numbers mainly across Latin America. The largest Catholic Charismatic populations are in Brazil (61 million), the Philippines (26 million) and the United States (18 million), though the highest concentrations of Catholic charismatics are in Guatemala (34% of the country), Puerto Rico (31%) and Brazil (29%). 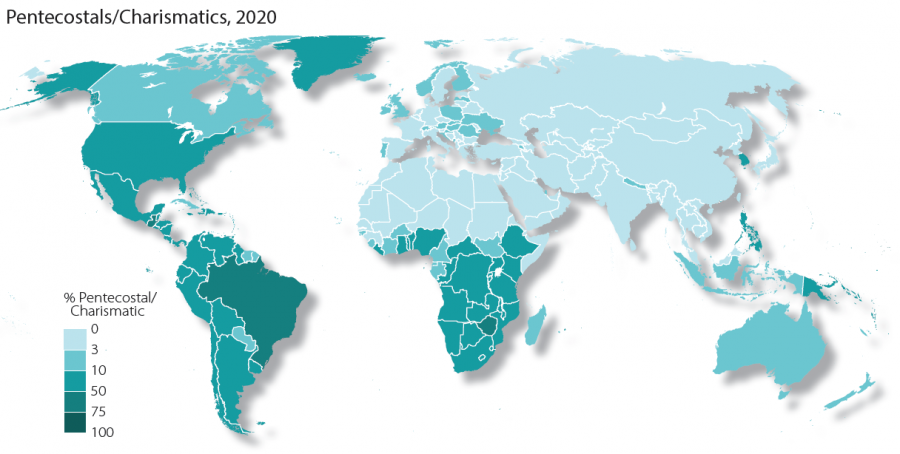 The Pentecostal/Charismatic movement represents some of the fastest-growing Christianity in the world in the 21st century. However, the movement has struggled with megachurches dominated by certain bold personalities, leading to problems with leadership in the second generation. Some have tried to keep control within biological families, often making the situation worse. Lack of theological training is also a challenge for these rapidly-expanding churches and networks.