Protestants Around the World

Here’s a short excerpt from the World Christian Encyclopedia, 3rd edition (Edinburgh University Press) on Protestant churches in global perspective. This comes from the 32-page full-color Global Overview which is available for download at https://edinburghuniversitypress.com/book-world-christian-encyclopedia-hb.html.

Throughout 2017, Protestants around the world marked 500 years of their history, which symbolically began when Martin Luther nailed his 95 theses to the door of the Wittenberg Church in October 1517. Although for several centuries the Protestant movement was based in Europe, then Northern America, it eventually expanded out of its Western homelands and spread all over the world. From its 16th-century origins in Western Europe, Protestantism had spread to nearly 80% of the world’s countries by 1900. In 2020, there are 586 million Protestants found in nearly every country. Today, many different families of churches exist within Protestantism. The largest families are Pentecostal, Anglican, joint Lutheran/

Reformed, Baptist, United (union bodies of different traditions), Reformed/Presbyterian, Adventist, Methodist, Nondenominational, Holiness, Congregational, Brethren, Disciples, Mennonite, Salvationist, Friends (Quaker) and Moravian. Nearly all Protestants were European in 1600, and Protestants represented more than 10% of all Christians worldwide. Their share of World Christianity reached its high point around 1900, when it was about 24%; in 2020 it stands at 23.2%. Protestants will surpass their previous high point by 2050, however, when they are projected to be more than 26% of all Christians, due in part to continued growth in Africa.

By 2020, the European share of Protestants had dropped to 15%. By 2050 it is expected that less than 9% of Protestants will be European. In 1900, almost 93% of all Protestants lived in the Global North (Europe and Northern America), but this percentage has fallen to 25% in 2020 and by 2050 is expected to fall further, to 16%. The shrinking of Protestantism in Europe is striking given such rapid decline in an area with little to no Christian persecution. 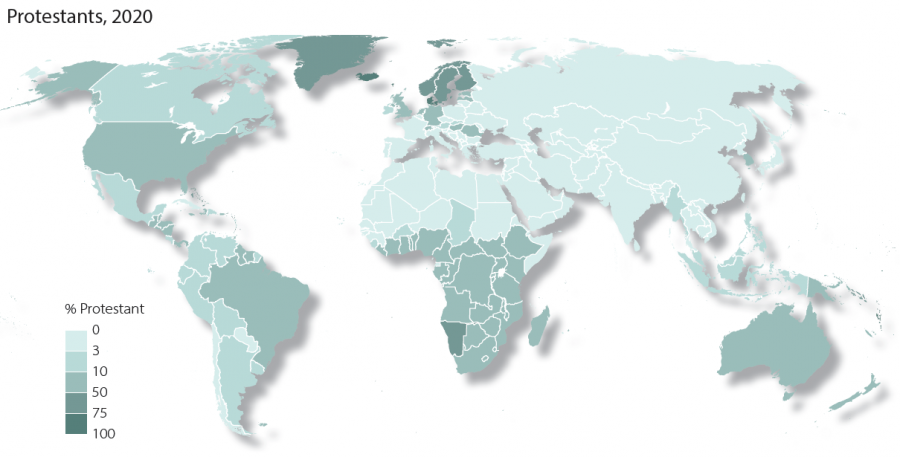 African Protestants were only 1.6% of all Protestants in 1900 – and these mostly Europeans in South Africa – but in 2020 they represent 44% of the global total and are projected to reach 55% by 2050. That is, sometime around 2040 half of all Protestants will likely live in Africa. Namibia, for example, was home to only 8,000 Protestants (5.6%) in 1900, but in 2020 this number surged to more than 1.75 million (65%). Before 1970, most African countries embraced Christianity, especially Protestantism, initially because of Western missionary efforts but also due to indigenous initiatives. Despite the globalisation of Protestantism, the five countries with the greatest proportions of Protestants are still found in Northern Europe. But Brazil, China, India and Nigeria have much larger Protestant populations, another indication of the shift of Protestantism to the Global South.

Although Protestants globally continue to grow faster than the general population, the most profound changes continue to occur in Latin America and Africa. In Latin America, Protestantism was introduced by foreign missionaries, but soon leadership was passed to local converts. Periods of rapid expansion of Protestantism often coincided with various levels of conflict and violence but helped to create a thriving religious marketplace in the face of hundreds of years of Catholic hegemony on the continent. Many of the global Protestant Christian families (Anglican, Lutheran, Methodist, Presbyterian) have been struggling with policy issues related to same-sex marriage. In recent years, there have been splits between groups following votes in national, regional and global conferences.

Protestants, especially through the efforts of the World Council of Churches and other pan-Christian groups, have been active in the ecumenical movement. While its genesis was in the early- to mid-20th century, it continues in the 21st century with a strong emphasis on global commonalities among the various churches. Dialogue between various kinds of Protestants and both Catholics and the Orthodox has shown great promise. Conferences of this kind are held both regionally and internationally every year.