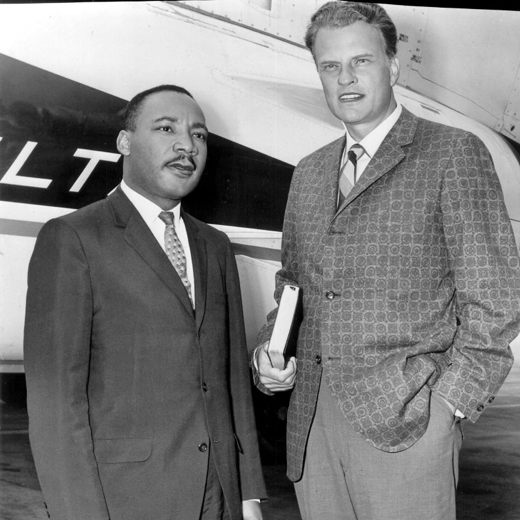 I imagine that if Martin Luther King, Jr. had been applying to graduate studies when Russell Conwell was leading his Baptist Temple College in Philadelphia that King would have attended graduate school with Baptists in Philadelphia rather than with Methodists in Boston. I say this because Conwell was so very consistent in his commitment to civil rights and especially to education for justice and education for African Americans. That is the best of our Evangelical heritage, but it is our 19th century Evangelical heritage which had a much better record on civil rights than our 20th century record.

This Martin Luther King Jr. Day, we need to be honest in admitting that the “neo-evangelicals” who marked their beginning in the late 1940s, were reforming fundamentalists with major concerns for Communism, not civil rights. History is important, so let’s learn some of her lessons here.

Let’s look at some key figures who could have made a difference. Billy Graham reached out to King, even inviting him to pray at his New York crusade in July of 1956. As a southern fundamentalist by heritage, this was an unexpected, though very Christian move. King accepted and he prayed: “And in these days of emotional tension, when the problems of the world are gigantic in extent and chaotic in detail, give us penetrating vision, broad understanding, power of endurance and abiding faith, and save us from the paralysis of crippling fear.”

Graham was pleased. King was pleased. A long term, though very distant correspondence followed. Graham received great push back and resistance from his supporters. His future organization was at risk. How could he move forward? He walked a narrow line of his own choosing. His greatest concern was individual conversion, and he was consistent in his moderate approach to change. Let us be clear; it was his theology that held him back from full support of the Civil Rights Movement.

Harold Ockenga, Gordon-Conwell’s first president, like Graham did not fully shake off the more fundamentalist theology that prevented direct social engagement. Both men were close to J. Edgar Hoover whose constant fear of Communism overwhelmed his social concerns. In fact, Hoover wrote on the pages of Graham’s magazine, Christianity Today, on numerous occasions, warning Christians of the Communist threat. Ockenga did his dissertation at the University of Pittsburgh on Communism.

To add to our troubled heritage regarding the Civil Rights Movement, J. Howard Pew, who helped to finance all of these new Evangelical Institutions had no interest in Civil Rights, but was very concerned about the threat of Communism and the promise of Free Enterprise. Money was not silent in the overall response of Evangelicals.

Today, I suggest we acknowledge our missed opportunity in 60s and 70s and start a new way forward, revisiting the discourse, the legislations and the sermons of the period. Evangelicals can improve our future, by revisiting a history that we largely let pass us by:

Then, let’s talk about how we can learn from our past, and carve a new future for Evangelicalism. Our nation, and the nations of the world, need an Evangelicalism that unites, that exposes injustices and sees such social engagement is pleasing to the sacred heart of Jesus.

It may be helpful to pray the prayer that King prayed at Graham’s crusade, a prayer which seems all too contemporary:

And in these days of emotional tension, when the problems of the world are gigantic in extent and chaotic in detail, give us penetrating vision, broad understanding, power of endurance and abiding faith, and save us from the paralysis of crippling fear.”