“The truth must be taken wherever it is to be found, whether it be in the past or among strange peoples.”
Al-Kindi (801-873), Baghdad

The first city in our tour of a “History of Christian-Muslim Relations” is Baghdad. Having built Baghdad in 762, Caliph al-Mansur (ruled 754–775 CE) moved the capital of the Abbasid dynasty there from Damascus, soon making it the richest and largest city in the world. Muslim historian al-Tabari reported that Christian monks once prophesied that a lord named Miklas would one day build a spectacular city around the area of Baghdad. The caliph was delighted upon hearing this ancient prophecy—after all, as legend has it, al-Mansur was called Miklas as a child. (Benson Bobrick, The Caliph’s Splendor, p. 65).

Caliph al-Rashid (ruled 786–809 CE) built a magnificent library named Khizanat al-Hikma (Library of Wisdom) filled with manuscripts and books in several languages. Curated by al-Rashid’s father and grandfather, the collection spanned various subjects in the arts and sciences. Three decades later, the collection had grown so large that al-Rashid’s son, Caliph Al-Mamun (ruled 813–833 CE), built extensions to the original building and turned it into a large academy named Bayt al-Hikma (the House of Wisdom). The House of Wisdom was the largest repository of books in the world by the middle of the ninth century and became the leading center for various branches of study, including mathematics, astronomy, medicine, alchemy, chemistry, zoology, geography, and cartography.

Later, al-Mamun added numerous other study center and an observatory in 829 CE to allow more scholars to pursue their research. Translators, scientists, scribes, authors, copyists and others met every day in the House of Wisdom to ply their trade and to contribute to discourse, dialogue and discussion. As a result, the academy incubated the translation of various scientific books and manuscripts and the exchange of philosophical concepts and ideas. One impetus for so many books was the introduction of new writing material, namely paper—a technology as revolutionary as the printing press for its time. The House of Wisdom attracted Muslim, Christian, and Jewish scholars from all over the Muslim world and was a place where a wide range of languages including Arabic, Farsi, Aramaic, Hebrew, Syriac, Greek, and Latin could be spoken and read.

Hunayn bin Ishaq (809–873 CE), the most important of the East Syriac Christian translators, was the son of an apothecary from the Arab tribe of Ibad and a lecturer at the medical academy in Baghdad. Mastering Arabic, Persian, Syriac, and Greek, Hunayn began his extensive translation at the early age of 17 and translated more than 260 works and authored over 100. Moreover, he was a physician, writer, and teacher in Baghdad during the reign of ten caliphs. For each manuscript he produced, Caliph al-Mamun gave Hunayn its equal weight in gold. Soon he was put in charge of the House of Wisdom, where he, his son Ishaq (died 910), and his grandson were assigned translations of Aristotle, Galen, Euclid, Archimedes, and Ptolemy. As a physician, Hunayn made great strides in healing diseases of the eye. Through the development of neologisms and the borrowing of foreign words, he created an academic Arabic terminology, elevating Arabic from the language of the Bedouins into a tongue with which complicated scholarly problems could be expressed. The medical historian Withington referred to Hunayn as the ‘Erasmus of the Islamic Renaissance.’ (Baum and Winkler, The Church of the East, p. 66–67)

At the core of Hunayn’s activities was his commitment to his Christian faith, which informed and motivated his scholarship. Hunayn wrote a Book of Logic and a history of the world from Adam to his own time. His translation of the Septuagint (Greek Old Testament) has been lost. Rejecting the advice of an acquaintance that he convert to Islam, Hunayn instead authored an apology for Christianity (How to Perceive the Truth of Religion). In it, he offered six reasons that someone would embrace falsehood and four reasons to accept religious truth, one of which was signs and miracles. Despite his scholarship, Hunayn valued transcendence in his own faith. In a Baghdad where there were frequent public debates between Christians, Muslims, and Jews, Hunayn not only wrote about his faith, but was active in defending it, remaining faithful until the end.

The House of Wisdom is now a distant memory for Christians and Muslims. In 1258, the Mongols invaded Baghdad, destroying the city and its repositories of knowledge. It is hard to imagine such a place existing today, with Christians and Muslims having lost such a robust tradition of integrating faith and knowledge. Though universities serve as modern “houses of wisdom,” their strongly secular underpinnings are unfriendly to religious perspectives. Thus, where can Christians, Muslims, and Jews gather today to solve some of the world’s most pressing problems? 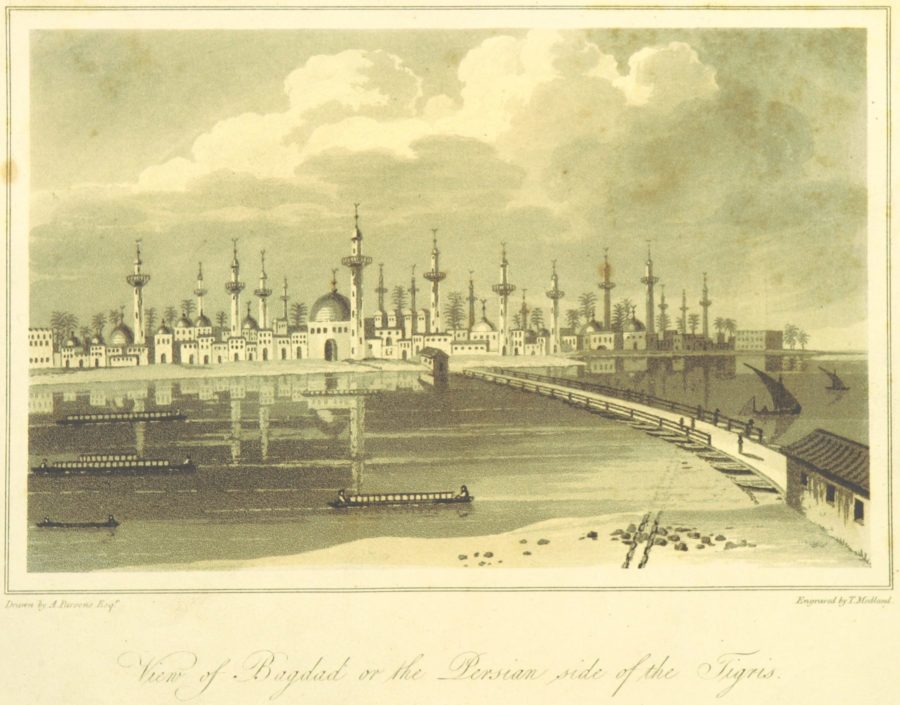 Image extracted from page 008 of Travels in Asia and Africa, etc. [Edited by J. P. Berjew.]”, by PARSONS, Abraham. Original held and digitised by the British Library. Copied from Flickr.