Eating Our Way to Mutual Understanding

With cultural and spiritual resonance, food shapes human relationships and our understanding of the world. In addition, it is at the heart of our interactions with each other and with the divine. Especially in the contexts of feasts and fasts, religious practices often require the use of specific foods with important symbolic values. Conversely, there are many examples of foods that are not allowed even though they are freely available, and religious codes often exclude whole categories of foods from consumption.

Food prohibitions are especially hard on immigrants who are challenged to acculturate to a new set of customs, norms, and expectations as well as to changes in the food environment. Traditional foods become unavailable while unfamiliar food products create extra challenges. Imagine an orthodox Shi’a Muslim from Iran faced with finding halal ingredients among hundreds of thousands of processed products in an American supermarket!

But while they are avoiding certain foods, religionists are also sharing food, often during calendar feasts. For example, during the Islamic fast of Ramadan, Muslims around the world start their day with a predawn meal of suhoor and break the day’s fast with the post-sunset snack of iftar. The act of eating and drinking together is a symbol of fellowship and mutual obligation that strengthens one’s bonds and identity within a faith community.

Some foods are treasured across religious boundaries. Bread is important to Christians, Jews, and Muslims. Bethlehem, the birthplace of Jesus, means “house of bread.” Bread is mentioned in the Bible over 300 times, particularly in the first five books of the Old Testament. The Lord’s Prayer beseeches God to “give us this day our daily bread,” and Jesus referred to himself as the Bread of life, saying that whoever believed in him would not hunger or thirst, for they would be fed with spiritual understanding. The identification of bread with Jesus’s body remains at the heart of the Eucharist sacrament or mystery, in which the bread is symbolically (or literally for Roman Catholics) transformed into the body of Christ.

When the ancient Israelites were told by God to flee from Egypt, they did not even have time to let their bread rise. This event is commemorated at Pesach, or Passover, when all leavening is banished from the home for seven days and only unleavened bread is eaten. Passover is part of the weeklong Feast of Unleavened Bread, one of three Jewish pilgrim feasts when males were to travel to the temple in Jerusalem to make an offering to God.

In Islam, bread holds a sacred place—it is considered a sin to let bread fall on the floor, and if it does, it is immediately picked up and forgiveness is asked of God for having allowed it to be desecrated. In almost all Muslim countries where bread is the staple, it is used to scoop food or it is laid on the plate as a starchy bed for stews or curries. Among Sufis, bread consecrated by clergy is imbued with spiritual power. By speaking the name of God during the bread-making process, the bread is filled with baraka (spiritual power), which is then shared by those who eat the bread.

Food is strongly linked to hospitality in Arabic cultures, and Muhammad encouraged sharing food as a means of creating common bonds and sharing in common blessings. He encouraged believers to accept any food that was offered, for to refuse such food was to refuse divine bounty and to neglect honoring a noble act. So important was this principle of courteous acceptance of hospitality that it was to be followed even if it meant breaking a religious fast. In the Sufi tradition particularly, hospitality assumed tremendous and enduring importance, as seen today in the form of feeding stations in Sufi centers. In both Jewish and Christian contexts, hospitality is also paramount. The writer of Hebrews admonishes, “Do not neglect to show hospitality to strangers, for thereby some have entertained angels unawares.” (ESV)

Given the importance of food and hospitality in Christianity, Judaism, and Islam, isn’t it time to consider eating together as one way to break down barriers and build friendships? We just might find ourselves eating our way to mutual understanding. 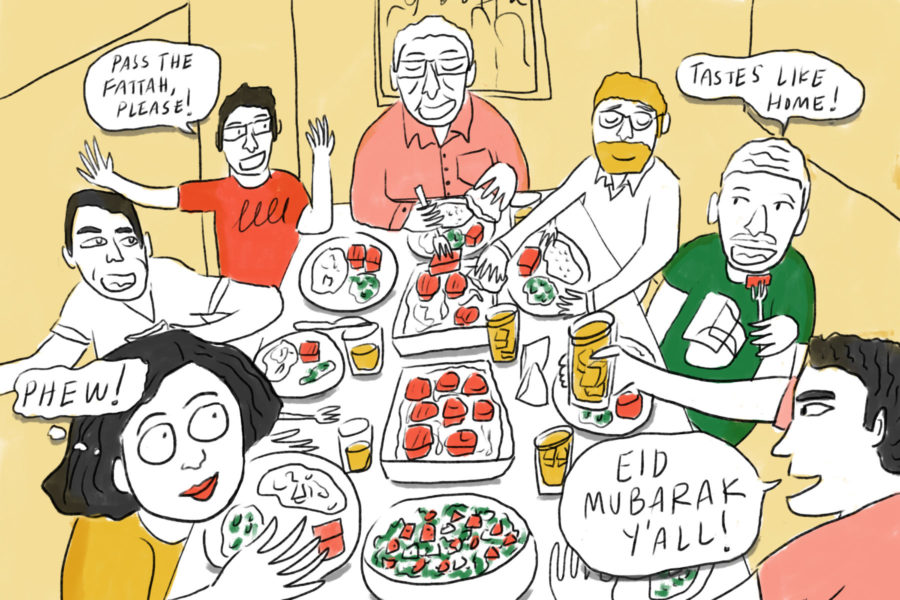