Philip Jenkins is one of the most sought-after scholars of World Christianity. He has an almost supernatural ability to synthesize huge amounts of dense information into an accessible and compelling narrative for a wide audience. Two of his most famous books are The Next Christendom: The Rise of Global Christianity (Oxford University Press, 3rd edition 2011) and The Lost History of Christianity: The Thousand-Year Golden Age of the Church in the Middle East, Africa, and Asia–and How It Died (HarperOne, 2008). I highly recommend both books for an overview of trends in global Christianity, past and present.

Last year, Jenkins released a different kind of book, Fertility and Faith: The Demographic Revolution and the Transformation of World Religions (Baylor University Press). This book bridges a gap between world religion studies and the demographic study of religion – meaning, it’s right in the wheelhouse of what we do at the Center for the Study of Global Christianity (see this article in Christianity Today, for example, about the relationship between fertility and Christian mission). His thesis is that fertile societies (i.e., those that have more babies) tend to be more religious, and more religious societies tend to be more fertile. Fertility rates are dropping around the world, and in some countries they are as low as those found in Europe. 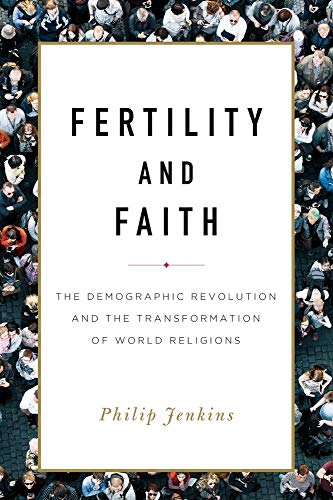 But what is the relationship between fertility and religion? It’s not cause/effect and it’s not correlation/causation. Jenkins argues fertility and religion are inextricably linked, and fertility rates are an effective measure of secularization trends: lower fertility, less religion; higher fertility, higher religious commitment and fervor. He is so confident of this that he stated in an article last year, “Tell me the fertility rate of a particular nation, and I can make a reasonable assessment of the strength or weakness of institutional faith in that society.” (The word “institutional” here is key: Jenkins is not looking at private religious beliefs or practices, he’s only looking at institutional forms of religion, like church membership.) He argues we live in a “new world” with numerous factors impacting fertility and religion, including women’s education, employment, and contraceptive use; immigration, urbanization, and large youth populations; mass media (especially Western media exported around the world); acceptance of same-sex marriage and alternative family structures; and conflict and violence.

This blog is not the proper place for all my methodological and theoretical quibbles about this book (I have a forthcoming review in the Review of Religious Research, if you’re interested). While I generally recommend this book, there is a problem with applying trends from Western Europe to the rest of the world. Jenkins’ theory is based off Europe’s Second Demographic Transition beginning in the 1960s, where families began to rapidly shrink, which coincided with a decline in religious behavior and institutional religious structures. From a global perspective, it is problematic to use a European trend as a baseline for a global story. Globalists don’t ask when the rest of the world is going to catch up to trends in the West. It is entirely possible, even probable, that Africa, Asia, Latin America, and Oceania will have their own trends concerning the relationship among societal change, religion, and fertility. Case in point: The United States of America. The USA challenges every hypothesis related to fertility and religion as a highly industrialized but also highly fertile and highly religious country. There are signs of religious decline, such as surveys that report declining rates of absolute belief in God, importance of religion, and daily prayer. Institutional religion is certainly on the decline, with most mainline denominations losing members every year. However, Jenkins makes a curious statement that helps move our thinking beyond institutional religion and into spirituality, which is fitting for the American context: “If low-fertility societies are malarial swamps for institutional religion, they might be hospitable to diverse forms of spirituality” (p.74). The decline of institutional religion doesn’t necessarily mean spirituality is dead.

The conclusion of the book is geared toward religious communities themselves. Trend lines don’t carry on indefinitely and, in theory, can change at any moment. He encourages readers that low fertility does not necessarily mean a total collapse of religion. But he also warns readers that being religious in a low-fertility world has its challenges and will require innovation. He points to the movement away from “mass public devotion” in European Christianity to a greater emphasis on more mobile communities and networks of faith.

I realize many readers of this blog might not be interested in the level of analysis in Faith and Fertility. As famous sociologist of religion (and friend of the CSGC) Peter Berger used to say – it’s interesting… if you’re interested in it.