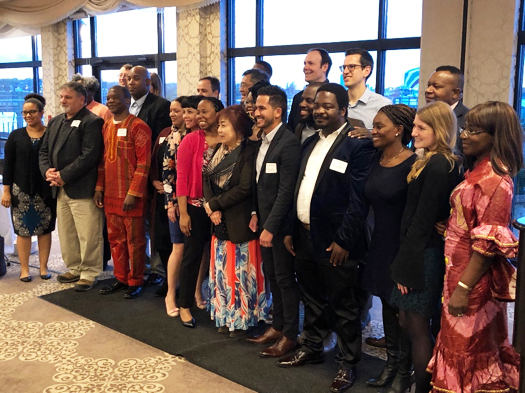 [This is part 5 of a 7-part series on the community vision for Gordon-Conwell Theological Seminary. To become a thoughtful, loving, Christ-centered community of global discipleship.]

Christianity is the most global religion in the world. Many people have not received this message yet.

When I was attending Gordon-Conwell, Mission Professor J. Christy Wilson noted that “in the near future there would be more Christians outside of the West than in the West.” It has happened.

We still (falsely) are under the impression that Christianity is a western religion which Africans, and Asians got from the West. We now know that this is bad history, and bad history leads to bad education and formation.

Formation for ministry, in any context, must be faithful to the fact that Jesus Christ came to bring the Gospel to all the world; to each nation or group of people. The Good News is both particular (for each group) and universal (for all people). Although we must teach in a particular cultural context, with a particular language, and using specific rooms or learning platforms, we must always point to the intercultural and universal  nature of the Revelation that we proclaim.

Two things need to be said about this “global discipleship” we are talking about: it is our heritage, and it is our hope.

As we have mentioned before, both of our founders, and our “re-founders” (in 1969) paid attention to the cross-cultural (and therefore intercultural) nature of the Gospel. A.J. Gordon, great pastor that he was, established a missionary training institute. He was aware of the presence of Chinese in Boston, but more importantly he and the school were concerned to send missionaries to the Belgian Congo. As a pastor in Boston his concern and ministry was global.

Russell Conwell’s ministry concern was also cross-cultural and social in breadth. Conwell’s father was a personal friend of John Brown, and Fredrick Douglass. Riding at night to transport escaped slaves, and then inspired by the preaching of Henry Ward Beecher and the speaking of the presidential candidate Abraham Lincoln, Russell Conwell carried a special concern for African Americans all his life. His church provided education for the underprivileged in North Philadelphia.

When their two schools were combined in 1969, one of the key players was Billy Graham who also had a special concern for mission and cross-cultural proclamation. Billy Graham majored in anthropology and all his life he was attentive to the diverse cultures to whom he preached.

Today, building on this great heritage, and with about 2/3rds of the Christians non-Western, our discipleship must be inter-cultural in nature and global in reach. We can not afford to teach theology or church history as if our American or Western Christianity is the norm. We mis-represent Jesus as Lord of the nations when we do this. Our study of Scripture, what we emphasize in church history, even how we prepare people for counseling, must engage other cultures and must think of other nations.

International students are our lifeline if we would see vital Christianity return to the West. Christianity’s decline in the West may have only one hope: a re-evangelization from the non-western nations. How ironic that the Gospel that went out from the West during periods of revival and revitalization, now must be returned to a humbled West by those who now hold the vitality of global Christianity.

Discipleship, learning, community building, and all of our formation must be intentionally global. It is exciting, really. That is, if we are willing to humble ourselves and receive from “the nations.”