How many Muslims are there in the United States?

Despite our name – the Center for the Study of Global Christianity – we also research other world religions. In fact, we track 18 major categories of religion in every country of the world (there’s 234 countries). That’s a lot of work! I won’t write a blog post for every religion in every country (that would be over 4,000 posts, in case you’re wondering), but Muslims in the USA are a particularly tricky population to count.  Unlike many other Western nations, the United States does not ask a religion question on its population census, making it hard to estimate how many people belong to each religious group. Fortunately, there are a lot of other sources out there, like surveys, polls, and data on ethnic groups.

In January 2016 the Pew Research Center released a report with a new estimate for Muslims in the United States in 2015: 3.3 million (1.0% of the US population), projected to double by the year 2050. Yet, we estimate that in 2015 there were 4.4 million Muslims in the United States (1.4% of the US population) projected to more than double to 10 million by 2050 (2.6% of the US population). Our figure is higher than Pew’s because we utilize an assessment of the size of ethnic communities in the United States to generate our estimate, whereas Pew’s estimate is based on self-identification in surveys in combination with US census data (also a valid and helpful way to measure religion). The largest communities of Muslims in the USA are from the Middle East and Asia, such as Lebanese, Syrians, Iraqis, Pakistanis, Kurds, Bengalis, and Persians. More recent immigrants include 90,000 Somalis, nearly all of whom are Muslims. Another more recent community is Bosnians, over 150,000, most of whom Muslims who immigrated after the early 1990s. In addition, approximately 29% of all Muslims in the United States are African Americans. The size of each of these communities is sourced either by the US government or by scholars who study these communities.

The American Muslim population today is divided into two groups, immigrants and converts. African Americans began converting to Islam in the mid-20th century. A key issue for Muslim immigrants in the USA is the conflict between traditional Islamic values and integration into mainstream US society. In some ways the struggle for black Muslims is similar as they try to define what it means to be both black and Muslim, and if their kind of Islam is the same as what immigrants from Africa and Asia bring. Interactions between indigenous and immigrant Muslims has always been a sensitive issue. For the most part, the immigrant community, proportionately far wealthier and with access to greater resources than blacks, has focused on Muslims overseas and have paid little or no attention to the racism or financial problems faced by black Muslim communities. At the same time, black Islam has always different from more mainstream Sunni Islam, especially with the creation of groups like the Moorish Science Temple and the Nation of Islam.

A lot of people have a stake in properly assessing the size of the US Muslim population. It has not just religious implications, but also political and economic implications. We’re doing our best to keep up with the latest statistics.

Religion in the United States, 2020 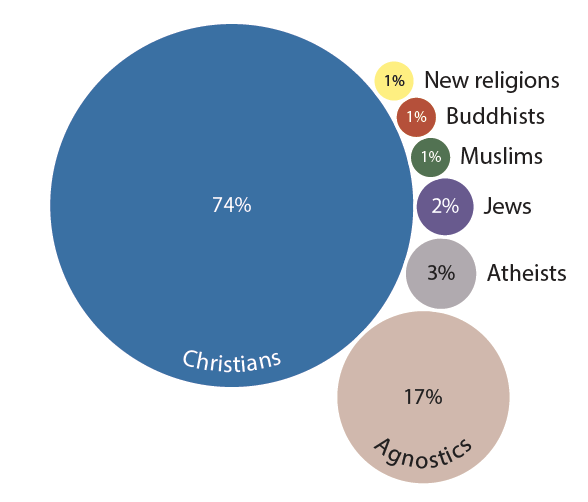 Edward E. Curtis. The Practice of Islam in America: An Introduction. NYU Press, 2017.