Korean megachurch pastor David Yonggi Cho (b. 1936), one of World Christianity’s most famous figures, passed away on September 14. Cho rose from poverty to become the leader of Yoido Full Gospel Church, one of the largest megachurches in the world. By encouraging discipleship and championing Pentecostal/Charismatic practices such as vigorous prayer and physical healing, Cho helped popularize the cell group movement in Korea – local communities where lives are transformed, and people experience physical and spiritual healing. Upon his death, Yoido had become one of the ten largest congregations (by attendance) in the world, and among seven of which are in Asia (the other three are in Nigeria): Yoido Full Gospel Church (Seoul, Korea; 480,000), Calvary Temple Church (Hyderabad, India; 225,000), Bethany Church of God (Surabaya, Indonesia; 140,000), Onnuri (All Nations) Community Church (Seoul, Korea; 75,000), New Life Church (Mumbai, India; 70,000), Victory Metro Manila (Manila, Philippines; 65,000), and Pyungkang Cheil Presbyterian Church (Seoul, Korea; 60,000) (see the megachurch list by Warren Bird). 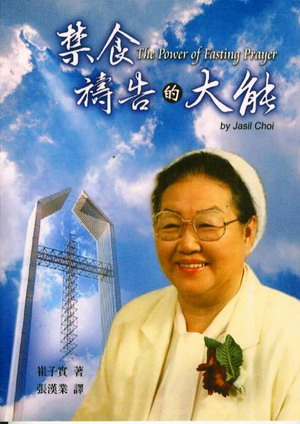 However, the story of David Yonggi Cho and Yoido Full Gospel Church would be remiss without Jashil Choi (1915–1989). Colleagues at Bible college, both Cho and Choi in 1958 began a small tent church, which grew to 600 people in three years. Cho, who became Choi’s son-in-law, led the congregation that would become Yoido Full Gospel Church in Seoul. Meanwhile, Choi would establish the well-known Osanri Jashil Memorial Fasting Prayer Mountain, one of Korea’s most iconic Christian sites. David Yonggi Cho credited his initial success to Choi’s influence – though Cho was the visible head of the church, Jashil Choi was a spiritual leader, ministering to church members by performing house visits, praying for physical healing, and exorcising demons. Nevertheless, her journey was one of resilience. Having become a Christian at a tent revival meeting of Sung-Bong Lee, a well-known Korean Holiness preacher, Choi suffered several misfortunes – including the death of her mother and sister, failed businesses, and feelings of emptiness – that led to a suicide attempt in 1956. Her life changed at another of Lee’s revival meetings, where Choi experienced the baptism of the Holy Spirit. It is said that “during the prayer time, she experienced fire running through her body from body and her tongue became twisted and spoke in a strange language” (see Julie Ma’s 2002 article).

For many women, prohibited in Korean Christianity from obtaining “official” positions of church leadership, Choi was a guiding light, exercising spiritual leadership through a legacy of prayer and service.

Despite the fact that Yoido, with its cohort of megachurches, represents the great success of Christianity in Asia, its history is not without controversy. Such churches – including Yoido – are often critiqued for their embrace of the prosperity gospel and an over-emphasis on money, personal wealth, and riches in this world. Like many other church leaders around the world, big or small, Yonggi Cho became embroiled in a scandal in which he embezzled $12 million from the church, in addition to being convicted of tax evasion. Such incidents are not uncommon in Christian churches, an issue my colleague Todd Johnson and I have written about before.

Nevertheless, the story of Yonggi Cho, Jashil Choi, and Yoido Gospel Church is not terribly unique on the global scale. It is a story of passionate Christians – both of whom came from background of struggle – wanting to serve God and others, starting a church that grows like wildfire, engaging in innovative thinking to increase the potential of that church, but yet, falling prey to the temptation of material wealth. Cho will certainly be remembered for his spiritual leadership and stature, but his legacy will always be complicated by a lopsided theology that invited the scourge of materialism and worldly gain.