The Religious Future No One Expected

Despite attempts to depict the twentieth century as a “secular” century, most of the people who lived during that period were, in fact, affiliated with a religion. In 1900, well over 99% of the world’s population was religiously affiliated. Yes, it’s true that by 1970, almost 20% of the world’s population was either agnostic or atheist (see graph below). So surely, 50 years later, the nonreligious should be 30%, 40% or even 50% of the world’s population, right? Well, the trend hasn’t gone that way. Instead, the collapse of Soviet Communism in the late twentieth century was accompanied by a resurgence of religion, making the world more religiously affiliated today (89%) than in 1970! This resurgence of religious affiliation continues (even though the number of atheists and agnostics continues to rise in the Western world), and the current growth of religions of all kinds in China (where the vast majority of the nonreligious live today) indicates that the future of the world is likely to be a religious one. By 2050 we project that 91% of the world’s population will belong to a religion. This is hardly the secular future so many predicted or hoped for and, in many ways, most of us are not prepared for it.

If the future is religious, maybe we should ask ourselves what we know about other world religions? People of various religious backgrounds or no religious background will benefit from pursuing mutuality in the context of world religions. Mutuality seeks to enrich one’s own tradition through humbly learning from others. We all have much to glean from people of other faiths and worldviews. We don’t have to “believe” the doctrines of other faiths in order to learn from the virtues they expound. According to the 2010 Pew Forum U.S. Religious Knowledge Survey, atheists and agnostics have more religious knowledge than religious followers. This should motivate people of faith to understand other beliefs as well as many atheists seem to. We must approach interfaith dialogue with hearts that are open to conversion—that is, conversion to a gracious way of viewing and interacting with others, and conversion to learning from and cooperating with others.

One of the rewards of knowing so many people of other religions is that virtually every day is a holiday in someone’s tradition! One day, it’s Eid al-Fitr, the end of the Muslim fast; a month later, Khao Phansa, the beginning of Thai Buddhist lent; and after another month, Zarathosht Diso, commemorating the death of the prophet Zoroaster. Knowing people of other faiths creates opportunities for celebration—a ritual shared by humanity.

Percentage of the world’s population belonging to no religion or religion, 1900-2020 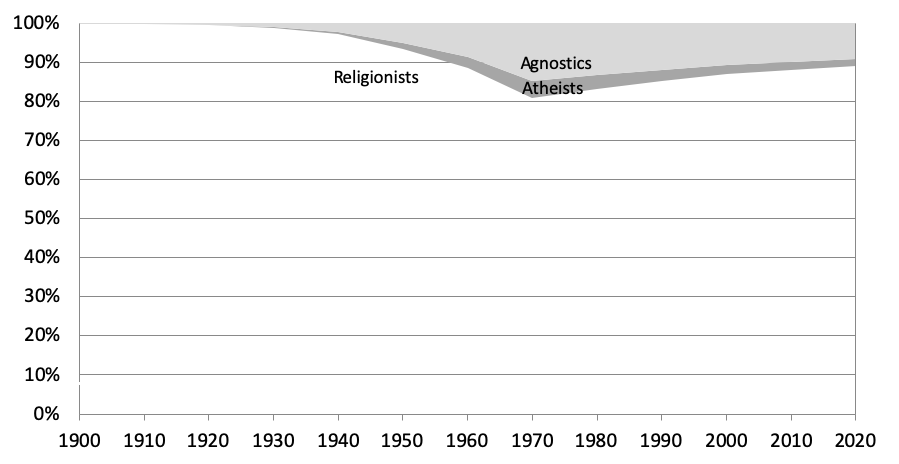