“Where do you get your numbers?”

Numbers are funny. Everyone uses them. They’re in your bank account and pay stubs. They’re on the calendar and we use them to mark time. But when you step on a scale to weigh yourself, you probably don’t ask, “Where did that number come from?!” (or maybe you do!). And yet, by far the #1 question I get asked when I give a presentation somewhere is, “Where do you get your numbers from?” We used to wait for the inevitable question-and-answer session to address it, but a couple of years ago we got smart and started incorporating a little bit of methodology into our presentations (don’t be afraid). We even have a 90-minute lecture on methodology alone that we torture unsuspecting graduate students with. We also wrote an entire book on the subject. But because we know that most people probably won’t read it, here are our sources in a nutshell.

(1) Censuses where a religion and/or ethnicity question is asked.

Censuses are one of the most comprehensive ways in which people are counted. About half of the national censuses in the world include a question on religion. National censuses are the best starting point for the identification of religious adherents, because they generally cover the entire population. Below is an example of a census question on religion, from Ireland in 2011. 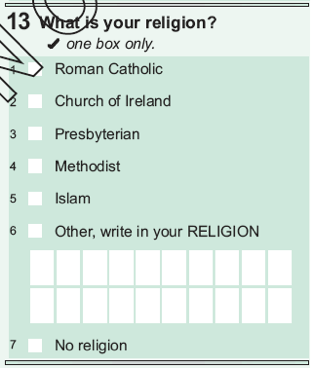 In the absence of census data on religion, large-scale demographic surveys, such as Demographic and Health Surveys (DHS), often include a question about the respondent’s religious affiliation. A demographic survey bases its sample on population parameters from the most recent census, but cannot provide accurate detail on the sizes of smaller religious groups because general population surveys typically involve only 1,000 to 2,000 respondents (i.e., they don’t ask enough people).

The fact that we utilize this source of data is what makes us different. Many religious communities keep track of their members, using everything from simple lists to elaborate membership reports. Detailed data collection and analysis is undertaken each year by many different Christian denominations, such as the Roman Catholic Church, the Presbyterian Church USA, Southern Baptist Convention, Church of the Nazarene, and Assemblies of God. We collect data from churches and other religious communities and triangulate those data with data from other sources, like censuses and surveys. Jews, for example, have one of the longest-running traditions of tracking figures, stemming to the late 19thcentury with the American Jewish Yearbook, a publication that continues today.

All the data we collect are analyzed and reconciled to arrive at the most accurate representation of a country or region’s religious make-up. We do this for every religion in every country in the world—past, present, and future. See? Methodology isn’t that painful.