Who is a Pentecostal, Really?

Here’s a short excerpt from our new forthcoming book, Introducing Spirit-Empowered Christianity: The Global Pentecostal and Charismatic Movement in the 21st Century (Oral Roberts University Press, 2020). For more on the subject, see the article by Daniel Sillman in Christianity Today, “Have Pentecostals Outgrown Their Name?”.

Scholars have had much difficulty ascertaining who is “in” and who is “out” of the Pentecostal/Charismatic movement. Who is a Pentecostal, really? To answer this question, we divide the movement into three types. First, there are Denominational Pentecostals (Type 1) that includes Classical Pentecostals (such as the Assemblies of God and the International Church of the Foursquare Gospel) and Oneness Pentecostals (such as the United Pentecostal Church). These groups tend to emphasize speaking in tongues as initial evidence of the baptism of the Holy Spirit. Second, there are Charismatics (Type 2) who are found in the mainline churches. These individuals have been baptized by the Spirit but remain Catholics, Lutherans, Anglicans, Methodists, and others. They might speak in tongues but tend to focus more on other gifts of the Spirit. Third, there are Independent Charismatics (Type 3). These are new denominations and networks that have broken off from Type 1 and Type 2 denominations. This represents a broad category that includes African Independent Churches, Chinese house churches, and White-led denominations such as the Association of Vineyard Churches. They also might speak in tongues but emphasize power, healing, and miracles in the daily lives of their members.

This taxonomy provides the framework for our estimate of 644 million Spirit-empowered Christians in 2020. This is about 26% of all Christians, expected to grow to 1 billion by 2050 (30% of all Christians). In 2020, Type 1 Pentecostals number about 124 million, Type 2 Charismatics about 268 million, and Type 3 Independent Charismatics 252 million. Each of these figures is based on denominational estimates in each country of the world. Over the next few weeks, we’ll unpack these statistics for each of the types to help us understand the state of the fastest-growing movement in World Christianity today. 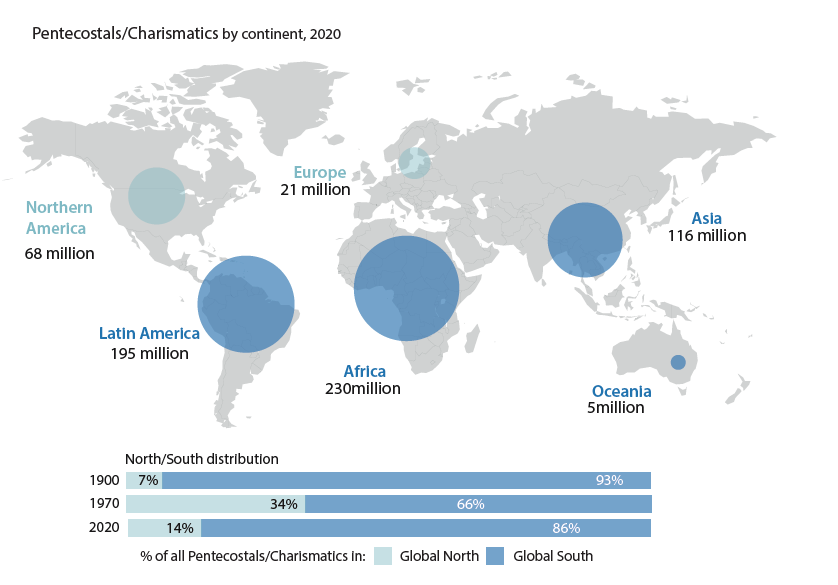