Associate Professor of Preaching, Associate Dean of the Latino and Global Ministries Program 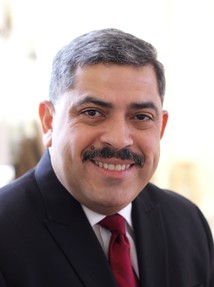 He has also taught in numerous positions, as Professor of New Testament and Preaching at the Latin American Biblical Seminary in San José, Costa Rica and as Instructor of Homiletics at the Episcopal Theological Seminary of the Southwest, in Austin, TX.

Dr. Jiménez has given the Krausse Lectures, of the Lutheran Seminary Program in the Southwest, Austin, TX (1995); the Blandy Lectures, of the Episcopal Theological Seminary of the Southwest, Austin, TX (1998); the Wells Sermons, at University Christian Church, Fort Worth, TX (2002); and the Casalis Lecture, at the Facultad Evangélica de Estudios Teológicos, Managua, Nicaragua (2004), among many others. Pablo has preached and taught in several countries, such as Canada, Colombia, Costa Rica, Guatemala, Haiti, Honduras, Jamaica, Mexico, Dominican Republic and Venezuela.

He is married to Glorimar and has three children: Antonio José, Paola Margarita and Natalia Isabel.