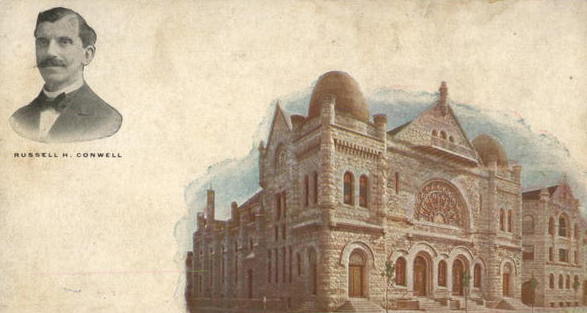 Although we are celebrating 50 years during this school year (beginning this week), the year 1969 is more of a date about a “restart” or “reboot” of the seminary. Many of the essential DNA components were honored in 1969. However, Conwell’s School of Theology (which started as classes taught in a church in Philadelphia) and Gordon’s Missionary Training Institute (which trained missionaries for Asia and Africa) were both much more radical than we were at our 1969 reboot. In fact, much more radical than we are today.

This post is not a manifesto, but it is a call to something radical, something bolder than we have become. More than “remember,” at this time we need to repent, and rethink what we are. Let me explain.

Russell Conwell, one of our founders, remembers riding quietly at night with his father in the old one-horse wagon helping escaped slaves travel north. He and his father were friends of John Brown and were radical in their commitment to emancipation. Conwell was so motivated by the public speaking of Abraham Lincoln and the preaching of Henry Ward Beecher that he collected a group of young men to go off to fight in the Civil War. Nearly killed during the war, he nursed a bullet wound for years, began a law practice, real estate work and newspaper reporting. He said at this time he was avoiding a call to ministry.

When Conwell turned his attention to ministry, he did it through the pulpit and also through the workplace, in education and health care. Conwell revived a small Baptist church in Lexington, Massachusetts before he took on another challenging church in North Philadelphia. Eventually it became Grace Temple Baptist Church: the largest church in North America at the time. However, there were people in the neighborhood who wanted education and one evening a young printer named Charles Davies asked for instruction in Greek and Hebrew so he could begin to prepare to be a pastor. One student the first evening, then six the next evening and within weeks he had 250 people coming to study after a full-day’s work.

Conwell saw a need and said, the church must respond. Education for the poor at an affordable price was his response. Education for all people; men and women. Then it was medical care for the needy. He was attentive to the needs in his community and he responded.

Conwell struggled as an impoverished student at Yale and he remembered the poor—his heritage. Concern for African Americans. Concern for the poor. Concern to revive churches. Education for professionals (did I forget to mention the hundreds of professionals in his Christian school in Boston?). All of this is part of our 19th and early 20th century Conwell heritage that we want to honor, even as we remember our late 20th century heritage.

Gordon-Conwell today, as we begin our next 50 years, must remember our founders were radicals who took great risks to be faithful to Jesus in their particular time in their contexts.

As you will see in the coming weeks, Gordon-Conwell will recover such radical leadership and vision for our time, for the sake of the Gospel.