A Brief History of Russell Conwell 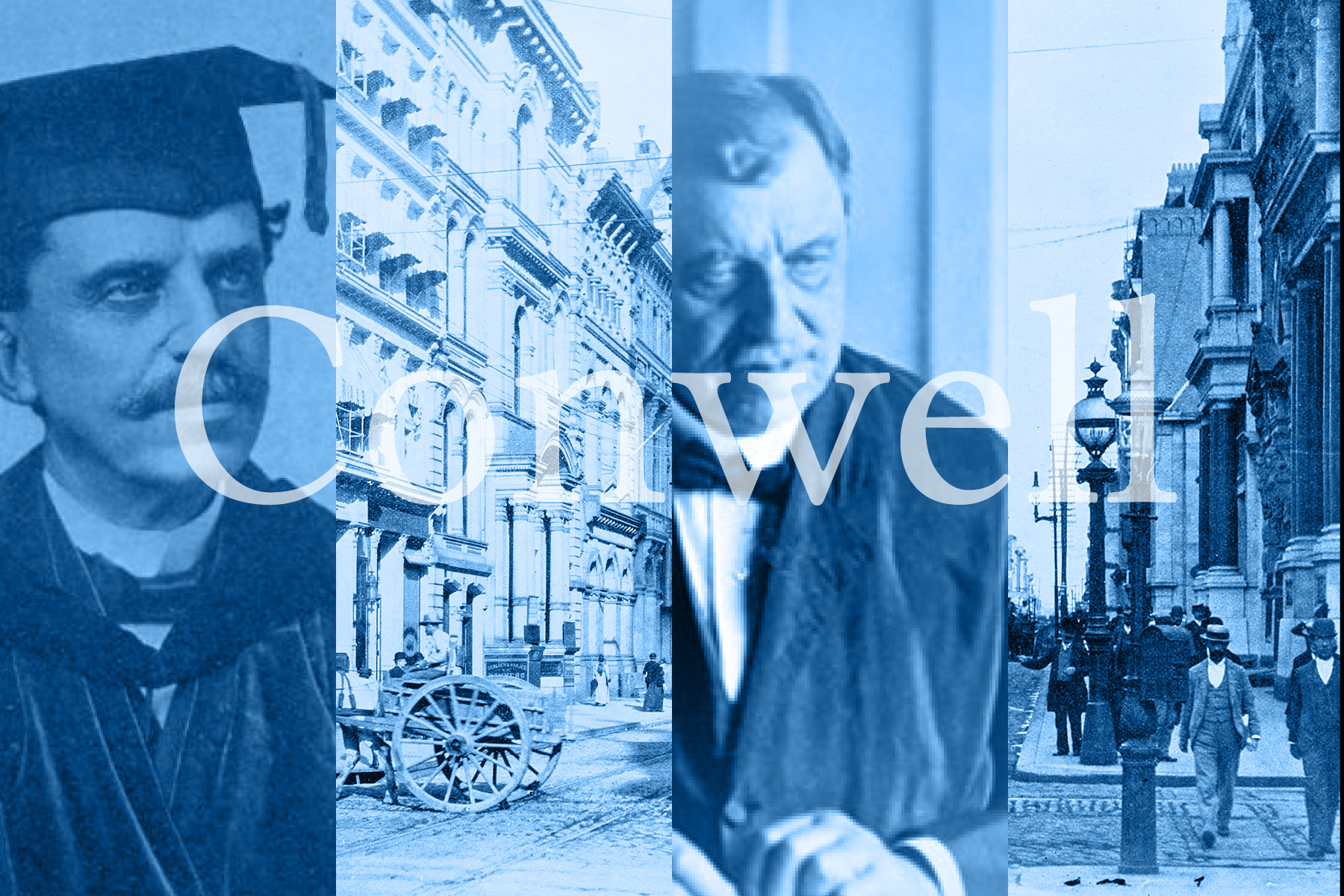 Russell Herman Conwell was raised in rural Massachusetts by abolitionist parents who remained poor farmers with a zeal for music and learning. His early experience of religion was not a good one, so when he went to Yale (at age 16) as a poor farmer’s boy, his treatment by the other students only embittered him further. His life was changed at the age of 17 when he heard, in one summer Henry Ward Beecher and Abraham Lincoln talk about the evils of slavery. That was the summer of 1860. He left Yale to recruit young men to fight in the Civil War.

His war experience was transformative. A young soldier died retrieving his sword from battle and then Conwell himself, having been shot in his shoulder, was left for dead on the battlefield. During his long recovery he reflected on life and the afterlife. It was his conversion. He was clear that such a conversion must change everything about how you live and why you live. “Love of humanity and faith in God” would now guide his life. He entered law school in Albany and then passed the bar exam, married one of his first pupils, Jenny Hayden (1865) and headed off to Minneapolis where he started a newspaper to help in the development of the region. She wrote a women’s column which was fairly women’s liberationist!

He was a powerful Christian lay leader: leading prayer meetings in his office and started the first YMCA in Minnesota. Soon his house burned down and he began bleeding in his lungs, so he was counseled to go off to Europe and the Holy Land to recover. Returned to NY to have the bullet removed from his lungs and began as reporter for Boston Traveler when he wrote his first book, Why and How the Chinese Emigrate and the Means they Adopt to get to America” (1870).

His life was then a whirlwind of innovation, care for the poor, interest in international events, helping cities to develop humanely, lecturing about his travels, practicing law (especially to help the poor), helping young men become active politically, developing a Sunday School of 800 members, and developing real estate in Boston.

In 1872 his wife, Jenny, died and his faith—which had taken a back seat to his many public pursuits—became renewed. In his grief he poured himself into study, including learning 5 languages while commuting on the train. He began collecting manuscripts from Europe and corresponded with theologians from Europe. He then remarried: Sarah Sanborn who was from a wealthy family in Newton, MA.

NOTE: Conwell was a real estate broker, founder of a newspaper, newspaper reporter and lawyer before he was a pastor. He understood the life of Christian businessmen. Attended Newton Theological Seminary and was ordained in 1879. Before his ordination he wrote 10 books, mostly about travel and important people of the time: U.S. Grant, Rutherford B. Hayes, James Garfield, etc.

Probably because of his fame as a public speaker, he was invited at the age of 37, to help revive a dying church in Lexington, MA. He calls this, finally, the real call on his life! So, he raised money to rebuild the church through a fair, and cooperated with local Roman Catholics in fundraising, inspiring the whole community to rebuild the church; both the congregation and building. Music, organizing young people’s groups, feeding the poor, raising money, preaching, and building a new building were all handled in his 18 months at the church. Also, businesses were started, Governor[1] Long visited the church and he Conwell published pamphlets to invite people to move to the area to develop it in a wholesome way!

From this success he was then invited to revive Grace Baptist Church in Philadelphia. Within a few years (1891) he had built the largest church auditorium in North America (seating for 3,135 opera chairs; actually seated 4,200). He soon founded two clinics/hospitals (Samaritan Hospital) for the poor, and a night school that met in the new Temple Baptist Church. Education for those who were excluded was a special concern for Conwell.[2]

Conwell’s style as a pastor was to arrive ½ hour early and play hymns and invite people to sing before worship. His preaching, like Jesus, was not prepared, no notes or outline, and he spoke from Scripture for the people in their situations in life. His preaching was poetic, filled with illustrations and stories, and peppered with humor each time. He attracted great leaders (John Wanamaker was an avid follower) as well as the poor. Having been treated poorly when he was a Yale, and having a special concern for African Americans, his ministry was always concerned to provide for those excluded because of poverty.

“Jesus went about preaching, teaching and healing,” was his guide in his church ministry. He did all thoroughly even while thinking of transforming the city itself through the church.

[1] And yet, Conwell stated clearly the focus of the church is bringing people to faith: “The mission of the church is to save the souls of men (sic).” From p. 207 of biography, Russell H. Conwell and his Work, by Agnes Rush Burr. He baptized over 6,000 people who came to faith under his ministry.

[2] “Temple University was a bridge from ignorance and poverty to knowledge and power.” P. 262 from Russell H. Conwell and his Work.