Here’s a short excerpt from the World Christian Encyclopedia, 3rd edition (Edinburgh University Press) on Evangelical Christians in global perspective. This comes from the 32-page full-color Global Overview which is available for download at https://edinburghuniversitypress.com/book-world-christian-encyclopedia-hb.html.

The historical origins of modern Evangelicalism lie in the first half of the 18th century in Europe. English-speaking Protestantism was renewed by a series of religious revivals, flamed by prominent evangelists like George Whitefield and John Wesley but supported by the lives of ordinary men and women. Over time, the term ‘Evangelical’ largely came to describe the network of Protestant Christian movements in the 18th century in Britain and its colonies, the individuals who were associated with those movements and a larger pattern of theological convictions and religious attitudes. Today, there exists a strong connection between Evangelicalism and the Pentecostal movement. Classical Pentecostal denominations like the Assemblies of God are largely Evangelical, and up to one third of all Evangelicals are Pentecostals. 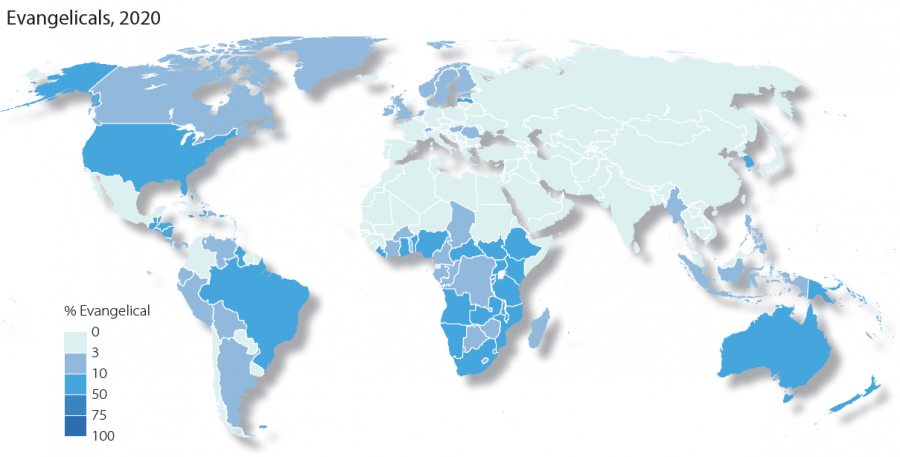 The situation is similar on a continental and regional basis. In 1900, Evangelicals exceeded 40% of the total population in Northern America and in Northern Europe but also in Australia/New Zealand and in Polynesia (where just over 50% of residents were Evangelicals). A century later, although they have seen significant growth in some areas, Evangelicals make up no more than 20% of the total population of any region except in Oceania, where they represent 31% (highest in Melanesia, Micronesia and Polynesia). Africa has had the most profound shift, since Evangelicals were only 1.7% of the population in 1900 (and mostly in South Africa), but in 2020, 12% of the continent is Evangelical. Africa’s share of global Evangelicalism has increased from 2% in 1900 to 42% in 2020. If trends continue, more than half of all Evangelicals in 2050 will be Africans.

The denominations with the most Evangelicals worldwide in 2020 include the Assemblies of God in Brazil, the Southern Baptist Convention (USA), the Three-Self Patriotic Movement in China and the Anglican Church of Nigeria. Two global organizations are of special note in representing Evangelicals: the World Evangelical Alliance (founded 1846) and the Lausanne Movement, established in a 1974 meeting held by American evangelist Billy Graham. Many countries also have national Evangelical alliances that work to bring Evangelicals together.