Introducing the Atlas of Global Christianity

As one of the features of our blog, we’d like to introduce you to some of our reference works and books that you may not have encountered. Here I’m reproducing some key paragraphs from the preface of our Atlas of Global Christianity to give you an idea of where it fits in documenting global Christianity. 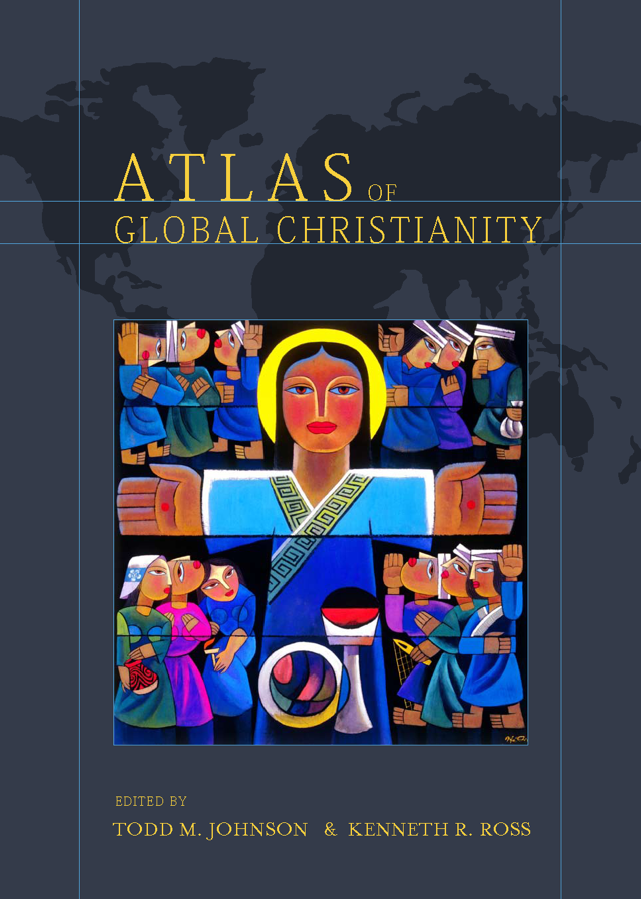 When 1,200 delegates gathered in Edinburgh for the World Missionary Conference in 1910, they had great ambitions for the spread of Christianity worldwide. With very few exceptions, they were European and northern American Protestant missionary leaders, and they looked out from what they called ‘the Christian world’ of their homelands to survey the missionary task to be completed in the ‘non-Christian world’. The fact that such a geographical division of the world into Christian and non-Christian is so anachronistic today is indicative of the great change which has taken place in the course of 100 years. in ways very different from those anticipated by the Edinburgh 1910 delegates, their fundamental vision has been fulfilled as the Christian faith has become truly worldwide in its scope.

The Edinburgh 1910 Conference was organised into eight Commissions that prepared substantial reports in advance of the event. Commission I, ‘On Carrying the Gospel to All the non-Christian World’, was the flagship of the Conference, headed by the Conference Chair, John R. Mott. This influential Commission appointed a sub-committee of its members, under the chairmanship of James S. Dennis, to prepare a Statistical Atlas representing the present status of missionary activities. The sub-committee duly completed its task, and the Statistical Atlas was presented to the Conference as an integral part of the Report of Commission I.

The preparation of the Atlas of Global Christianity, 1910–2010 is inspired by the centenary of Edinburgh 1910. Yet such has been the transformation in the demography of Christianity in the succeeding years that this atlas stands in sharp contrast to its 1910 predecessor. Whereas the 1910 atlas was concerned with the Protestant missionary movement (albeit with short sections on Roman Catholic and Eastern Orthodox missions), this atlas is fully ecumenical, taking account of the entirety of Christianity worldwide. Whereas the 1910 atlas mapped a uni-directional missionary effort across a binary division of the world into ‘Christian’ and ‘non-Christian’, this atlas takes account of a Christian missionary movement that is ‘from everywhere to everywhere’ – all six continents both sending and receiving missionaries. Whereas in 1910 missions were understood as something quite distinct from the regular life of the church, this atlas takes account of the entire presence of the church without losing sight of the reality that the missionary dimension is vital to its life and future.

The aim of this atlas is to comprehensively map ‘global Christianity’, to describe it in its entirety. Every Christian tradition in every country is examined in the context of a global Christianity. This includes every Christian denomination described under the rubric of six major Christian traditions: Anglican, independent, Marginal, Orthodox, Protestant and Roman Catholic. Whereas, in the past, each of these would be described on its own, here these are brought together under the unifying concept of global Christianity. Another major original feature of the atlas is that it presents the first comprehensive statistical and mapping treatment of Christianity since the massive demographic shift to the global South.

Whereas, in 1910, 80% of all Christians were Europeans or Northern Americans, by 2010 less than 40% of all Christians were from the global North. This atlas offers the first opportunity in the long history of Christian and mission atlases for a truly ecumenical atlas. in describing the history of Christianity, Andrew Walls highlights the tension between an ‘indigenising principle’ and a ‘pilgrim principle’. He acknowledges the fact that Christianity can and should go deep within each culture of the world but at the same time is never fully at home in any particular culture. Most of the emphasis in the study of world Christianity to date has been on the indigenising principle or ‘the particular’. Thus, compendiums on world or global Christianity contain case studies from different cultures around the world, emphasising their differences from Western Christianity. Some scholars go as far as defining ‘world Christianity’ as ‘Christianity in the non-Western world’. We also see an increased use of the term ‘Christianities’, as in the recent Cambridge History of Christianityvolumes published by Cambridge University Press. This atlas is sensitive to the particularities of Christianity in different cultural contexts and in different ecclesial traditions. However, it is distinguished by its determination to take account also of the ‘pilgrim principle’ or universal dimension of global Christianity.