The 100-year shift of Christianity to the South

In the past 100 years the most significant trend within global Christianity is that, demographically, Christianity has shifted dramatically to the South. This shift has been documented by many scholars as a groundbreaking process affecting not only all religions worldwide, but how Christianity itself is practiced as a global phenomenon. Over the course of the twentieth century and already into the twenty-first, Christians have continued to make up approximately one-third of the world’s population. However, this sustained percentage masks dramatic changes in the geographical make-up of global Christianity—a process of both North-South and East-West movement stretching back to the earliest days of Christianity that is far from inconsequential. 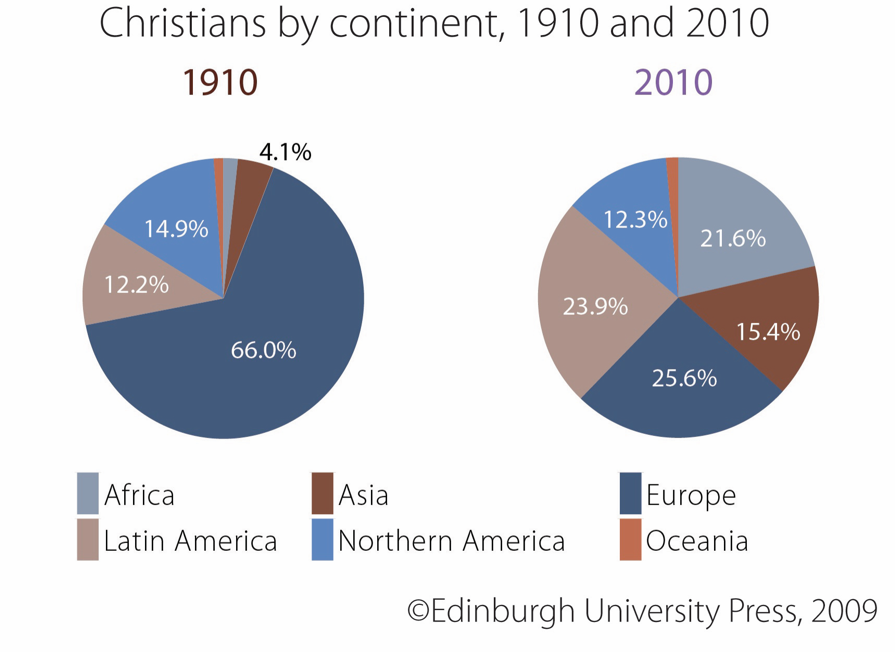 These remarkable geographic changes in Christianity also reflect serious differences between the worldviews of “Northern” and “Southern” Christians. In many ways Christianity has shifted to the global South demographically, but not culturally. This is a legitimate concern for Christians around the globe. Compared to most other religious traditions, Christianity has been generally accepting of scriptural, liturgical, and cultural translation throughout its history, with the translation process of the Christian message going back nearly to its inception. Christianity is the only world religion for which the primary source documents are in a different language than that of the founder (the New Testament is in Greek, while Jesus spoke Aramaic). Cultural and linguistic translatability are some of Christianity’s greatest strengths; strengths that, in light of its recent demographic shift, ought to be seen more readily in the diverse communities of Christians worldwide. The kind of cultural translatability needed today is similar to that seen when first-century Christianity moved out of its original Jewish setting.