What Does it Mean to be Global?

Last month, I taught a course titled, “An Introduction to Global Christian Spirituality and Global Leadership.” In the next few blog posts, I want to reflect on the meaning of the word “global” as it pertains to Christianity, spirituality, and leadership. 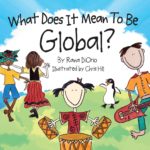 In the children’s book What Does It Mean to Be Global? Rana DiOrio explains that being global means…

When it comes to the essentials of being global, this is great advice for people of all ages.

As Christians, we belong to at least two global families. First, we were born into the human race—this beautiful mosaic of peoples, languages, ethnicities, religions, and cultures. While we celebrate the joys of being part of this rich tapestry, we are increasingly aware of the challenges of being woven together in it. Having the knowledge and resources to live well, we still flounder when trying to work together to “save” our planet. World leaders strongly disagree on trade, global warming, nuclear weapons, and a host of other issues. And yet, despite such differences, the human family overflows with creativity, producing technological marvels, impressive structures, dazzling works of art, poignant films, beautiful music, and stunning works of literature. Ours is a resourceful, chaotic family and we are glad to be a part of it.

Second, we belong to a global Christian family made up of 2.5 billion people (about a third of the human family). With Christians found in every country of the world, we are not homogeneous or monolithic, but a diverse assembly representing thousands of peoples and languages. We are Catholic, Orthodox, Protestant, and Independent by major tradition; some of us are Evangelicals, Pentecostals, or Charismatics or a combination of these. In addition, there are likely as many as 45,000 denominations! We may speak the local language, but we are all related to each other by our global faith.

Scottish mission historian Andrew Walls helps us navigate the challenge of local diversity and global unity by introducing two principles in tension in the global Christian family. The first of these is the “indigenizing principle”—namely, as Christianity takes deep root in the “soil” of all cultures, it is unique to each context in which it grows. The second is the “pilgrim principle”—that is, all Christians share a common identity while being aliens in this world. Both principles have been in effect throughout Christian history. The indigenizing principle is what has produced the diversity of Christian expressions around the world. The pilgrim principle is what has called us together, even as our differences separate us.

Unity is a worthy goal for our global Christian family. We follow Jesus, after all, to whom family not only designated one’s immediate, biological relatives but included all who are knit together in faith. Our global Christian family is defined by the interaction and sharing between different local forms of Christianity. While we work out that faith out in our local contexts, we share a global awareness of our common faith and global family identity. Family emphasizes both commonality and difference:

The tensions between commonality and difference create a dynamic that allows us to identify as Christians who are both global and local. Through such unity, we can serve both the global Christian family and the global human family.

One of the most important elements of this Christian global exchange is theology. With the demographic shift of Christianity to the global South, we have a special opportunity to rethink and reappraise the large systems of theological thought carried over for centuries. According to Asbury Theological Seminary president Timothy Tennent, our Western systematic theology textbooks may seem tidy and comprehensive, but when carried overseas they reveal glaring weaknesses, shocking silences, and embarrassing gaps. One danger is that as Western theology continues to be the standard by which all other theologies are measured, emerging indigenous theologies will remain ancillary subsets, or what Catholic missiologist Robert Schreiter refers to as “hyphenated theologies.” Our hope would be that while different cultures emphasize different aspects of theology, there would be a meeting place for all in the global Christian family, a place not dominated by any one culture, particularly not by Western culture.

Sixteen hundred years ago, Augustine wrote in his City of God, “This heavenly city, then, while it sojourns on earth, calls citizens out of all nations, and gathers together a society of pilgrims of all languages, not scrupling about diversities in the manners, laws, and institutions whereby earthly peace is secured and maintained, but recognizing that, however various these are, they all tend to one and the same end of earthy peace.” With the recent expansion of Christianity around the world and the anticipated spread of the gospel to all peoples, we can hope to realize the beauty of both the local and the universal in the context of a truly global Christian family.