Who owns global Christianity? No one, really. But looking at where Christians live by continent can be helpful when we think about what “World Christianity” really is. Here we see that as Europe has been steadily losing its share of the global Christian population, while both Latin America and Africa have been gaining. Latin America surpassed Europe as the continent with the most Christians in 2014, and Africa passed Latin America in 2018. This marks a milestone for African Christianity – often called the “new center” of World Christianity – but it also raises several important issues related to Christianity’s shift to the global South. Are Christian resources also shifting? Is theological writing shifting? Are global histories of Christianity being written? (Spoiler alert: the answer to all of these is largely ‘kinda?’.) The global South is home to the new “centers” of Christianity, while the gradual decline of Christianity in the west continues. Theological reflection has emerged throughout history, from the church fathers and mothers in the earliest centuries to Europeans in the next 1,000 years (Catholic, Protestant, and Orthodox). Today, voices can be heard from Africa, but also from the Philippines, Brazil, China, and Fiji. And for Oceania, hanging out at the bottom of the graph, don’t worry, I see you. 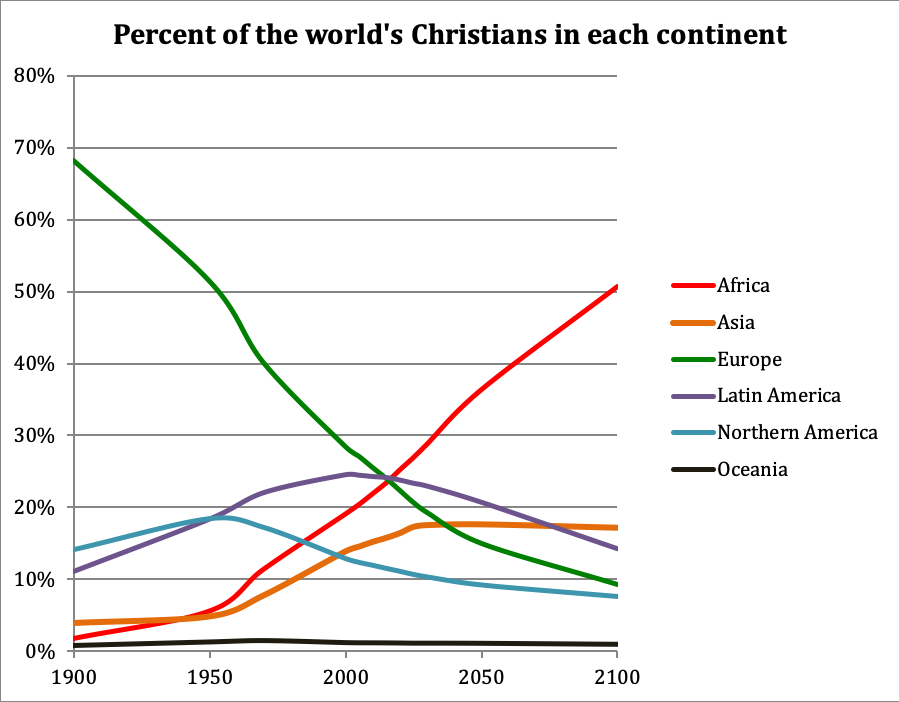 Confession: I think a lot about the continental makeup of global Christianity (it’s my job, what can I say). For Christians in Europe, that steep downward-facing green line in the graph above can look alarming. But maybe it shouldn’t be. Maybe there’s something to be said for Christianity returning to the demographic makeup of Christianity’s first century, when the religion was a majority-global-South tradition – Jesus was, after all, a Middle Easterner. This is my call to churches in Europe and North America: IT’S GOING TO BE OKAY. It’s okay for most Christians in the world to not look like you or speak like you or worship like you. I think we have a lot to learn from people who live in greater religious diversity (Asia , I’m looking at you); from Christians who have lived and worked among Muslim populations for generations (sub-Saharan Africa, that’s you); from Christians who deal with the negative consequences of climate change most acutely (yep, Oceania, that’s you); and, well, Latin America, we have a lot to learn from you, too (especially your neighbor, the USA!).

Here’s another way of looking at it, this time in a pretty map: 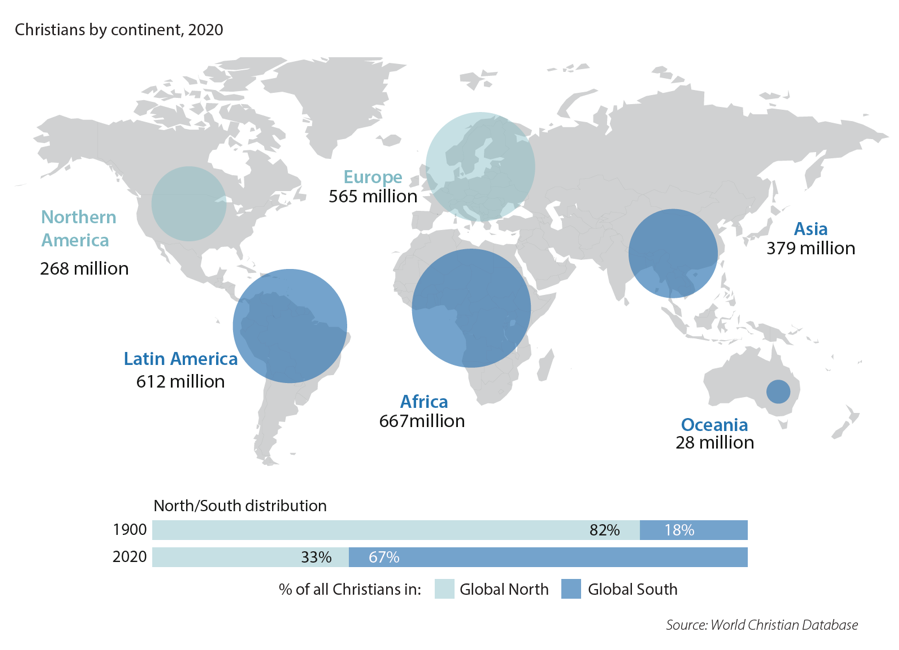 Like the graph, this map shows the continental makeup of global Christianity as a snapshot (2020 data). Africa is home to the most (667 million), followed by Latin America (612 million), then Europe (565 million). It’s important to keep in mind general population growth, which is the main driver of religious growth and decline. According to the United Nations, “more than half of global population growth between now and 2050 is expected to occur in Africa.” The population of sub-Saharan Africa is expected to double by 2050. That is what we call in demographic circles a big deal (yes, that’s a technical term). Africa is an extremely youthful continent, with the average age of Christians there only 19 years old. If there is a battle between continents, Africa is sure to win.