Christians as a whole, at any given time in history, have a definable geographic boundary and a demographic or statistical center. In practical terms, a single geographic point on Earth can be seen as the statistical ‘center of gravity‘ of all Christian followers at any given date – where the number of all Christians living to its north, its south, its east and its west is exactly the same. The demographic history of Christianity is viewed precisely through this lens in the map below.

It is important to point out that a series of single points connected by a line, or a trajectory, is compatible with differing explanations of the geography of Christian growth. All historians are aware that the drama of Christian expansion has unfolded in a complex set of events, but differing interpretations are offered. Kenneth Scott Latourette explains these events in terms of expansion and recession. Ralph Winter proposes viewing the expansion in terms of the penetration of new cultural basins in 400-year increments. Andrew Walls utilizes the motif of serial expansion, where Christianity moved into new areas and died out in areas of previous numerical strength. Nevertheless, utilizing any of these explanations (or others), a demographic center of all Christian followers can be identified for any date in Christian history. Locating and following the center of gravity of Christianity as a trajectory over time helps us to visualize the demographic growth of Christian expansion.

The first application of the trajectory is as a visual marker for Christian demographics. The trajectory of the demographic center of gravity of Christianity throughout the centuries provides a visual context to the Christian story, especially from the standpoint of Christian expansion. For example, in the earliest Christian centuries, Christianity penetrated dozens of peoples in Asia, Africa and Europe, including Jews, Romans, Greeks, Armenians, Copts, Ethiopians, Indians, Berbers, Syrians and Persians. Then Vandals, Celts, Anglo-Saxons, Vikings, Slavs, Turks, Russians and Chinese were added. The trajectory reveals the general path and direction where the largest numbers of individuals were becoming Christians–serving as a visual marker of the center of gravity of Christian expansion.

Second, a trajectory formed by the increase in Christian followers signifies more than simply a demographic reality. Where there are more followers, there are more churches, more priests and pastors, more Christian institutions, more potential missionaries to be sent out, more theologians and so on. The trajectory, then, has ecclesiastical, missiological and theological implications. These can be examined in the context of Christian history and the future of Christianity.

Trajectory of the statistical center of gravity of Christianity, 33–2100 CE 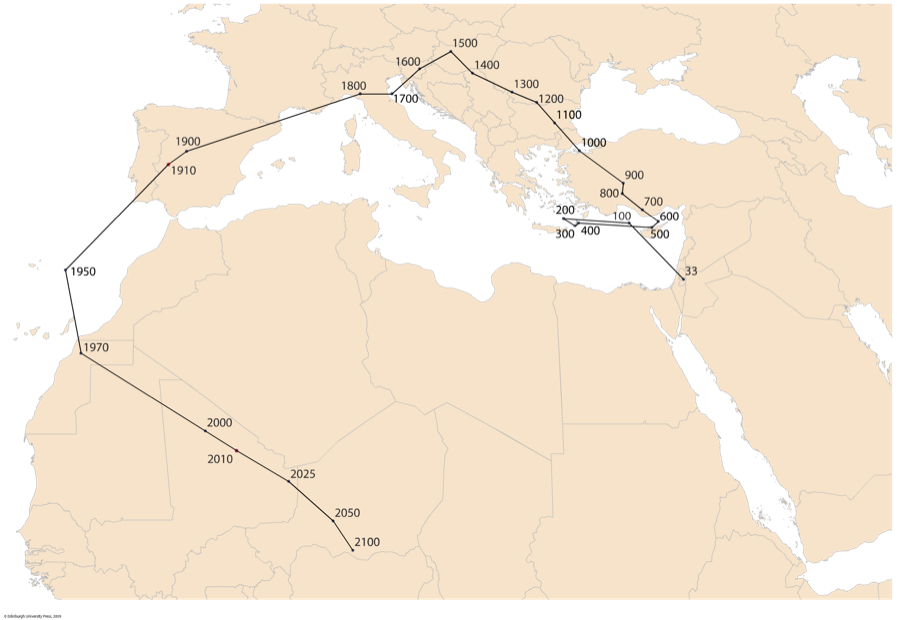