Not all Christians around the world celebrated the Resurrection last Sunday. Orthodox Christians, who make up almost 4% (292 million) of the world’s population, celebrate Easter this year on May 2, following the Julian, not Gregorian, calendar. Their largest communities are found in Russia, Ethiopia, Romania, Ukraine, Greece, and Egypt.

For most Christians, Easter is the pinnacle of the liturgical year. Higher church traditions such as Roman Catholics, Anglicans, Methodists, and Lutherans typically usher in the holiday with the Easter Vigil service on Saturday night. Ushering congregants from darkness to light, with fire representing the light of Christ,  the Easter Vigil journeys from creation to resurrection, recounting the story of God told through a series of readings from Genesis to the Gospels. During this service, new Christians are baptized, entering into full communion with the church. The height of the service is finally being able to declare “Alleluia!” after 40 days of introspection and repentance during Lent:

Christ is risen, Alleluia!
He is risen indeed, alleluia, alleluia!

This year’s Easter is the second celebration of Christ’s resurrection under COVID, with the usual traditions of packed churches, big family meals, and multi-day-long celebrations still limited for many, or even non-existent. Several countries have imposed complete bans of in-person worship, such as in Ireland, where a blanket ban on worship means that conducting services is considered a criminal offense. While a similar ban in Scotland was eventually deemed unlawful by its top civil court, Kenya has also suspended in-person worship, including celebrations for the upcoming Ramadan holiday.

Meanwhile, other countries continued to allow in-person worship despite surges in COVID infections, such as in Romania, where nearly 23,000 people have died of the virus. In Manila, the Philippines, Catholic bishops issued a letter that they would defy a government ban on religious services in their city – the capital of the most Christian country in Asia. These bans on worship during COVID make for some interesting discussions about religious freedom – are these government restrictions tantamount to discrimination or persecution against religious people on their most sacred day of the year?

Yet, it is difficult to entertain that thought when Holy Week typically spurs violence against Christians around the world. John L. Allen, Jr. reminded us that, “Every year on major Christian feast days, somewhere in the world, Christians will be killed or no reason other than that they chose to attend religious services. Because Christmas and Holy Week are the holiest periods on the Christian calendar, churches tend to be especially full, presenting ripe targets for anti-Christian hatred.” This year was no different. A suicide bomb wounded 20 people on Palm Sunday in a Catholic church in Makassar, Indonesia, with 200 people inside. A Pakistani Christian who reflected on Holy Week violence in the past, only wished for a safe Easter this year.

Pope Francis used his Easter Sunday message as an opportunity to remind Christians of the many ongoing conflicts in the world, including the civil war in Syria, the Russia-Ukraine border conflict, the Israeli-Palestinian conflict, the threat of Boko Haram in northeastern Nigeria, political instability in Myanmar, and criminal violence in Mexico. All of these conflicts have disproportionately impacted Christians. As much as World Christianity reflects on Christ’s victory over sin and death, may we remember to continue to mourn with those who mourn and suffer with those who suffer for their faith around the world, especially during the holiest of Christian observances. 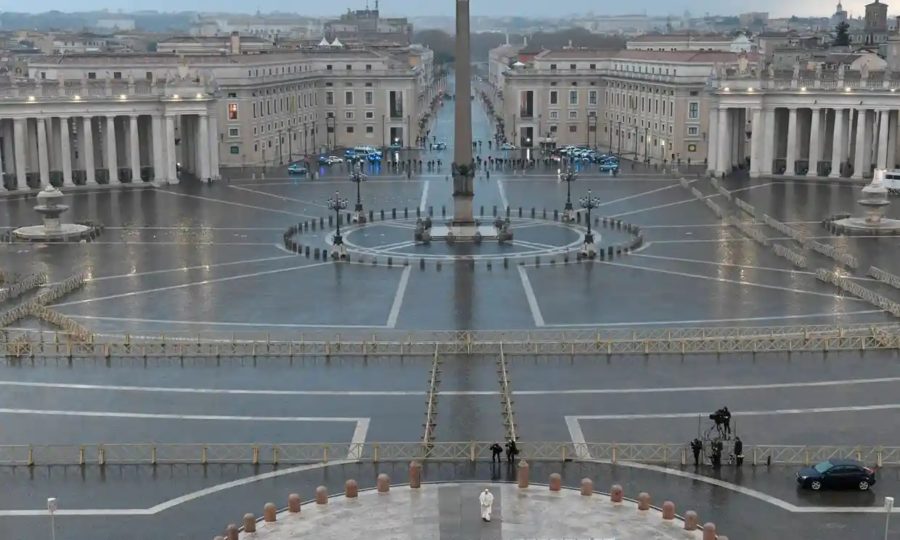 Pope Francis can be seen at the very bottom of this image of St Peter’s Square. Photograph: Vatican Media/AFP via Getty Images