When the Hagia Sophia was built in Constantinople in 537 CE, Christians represented nearly 60% of the population of Western Asia. Perhaps less known is the fact that, at this same time, Asians and Africans represented about two thirds of all Christians with only one third being European (World Christian Encyclopedia 3rd ed., page 917). The subsequent rise of Islam would gradually erode the presence of Christians in the region; by the time of the Ottoman conquest and the conversion of the Hagia Sophia into a mosque (1453 CE), the region was only about 20% Christian, with just 10% of all Christians living in Africa and Asia. Christianity was by then largely a European faith, with interactions between Christians and Muslims progressively framed as a conflict between the Christian West and the Muslim Arab and Turkish World.

Today, in 2020, only 5.4% of the region is Christian. This stark decline of Christians is pivotal in assessing the role of the Hagia Sophia in Turkey. Turkish foreign policy expert Ziya Meral expresses his alarm that “in two decades, the land that played a fundamental role in the emergence of Christianity will have lost most traces of it, save a few empty buildings here and there, full of hurried tourists and guides making up whatever story they can on that day.”

Meanwhile, between the 19th and 20th centuries, Christianity had spread around the world, such that today, Asians and Africans, along with Latin Americans and Pacific Islanders, again represent two thirds of all Christians! In other words, the Christian faith today looks more like it did when the Hagia Sophia was built in the 6th century than when it became a mosque in the 15th century. Consequently, rather than just a Western concern, the Hagia Sophia holds import to Christians throughout the world, with believers from Brazil, Nigeria, India, China, South Korea, and the Philippines having made pilgrimages to the Hagia Sophia and coming home with a renewed appreciation for the Orthodox expression of their Christian faith.

And yet, despite its long history, the struggle over the Hagia Sophia reveals some of its deepest faultlines in the 20th century.

In 1900, Turkey had a burgeoning Christian community (21% of the population), where over 3 million Armenian, Greek, Assyrian, Chaldean and other Christians had been based for centuries. However, the tragedy of the Armenian Genocide (also targeting other Christian minorities) and the forced migration of Armenian and Greek Christians (calamitous “Exchange of Populations,” supported by Western countries) dramatically altered the landscape. By 1950 less than 1% of the population was Christian. Under these devastating conditions, the preservation of the Hagia Sophia as a museum (since 1934) offered some dignity to the remnants of Christians who remained. In contrast, its conversion to a mosque sends a demoralizing message to its Christian minorities today (0.2% of the population in 2020). Orthodox scholar George Demacopoulos writes, “Through genocide, pogroms, property confiscation, harassment, and historical revision, Turkish leaders have demonstrated, time and again, that they have no interest in recognizing—let alone protecting—the Christian minorities of their nation.”

While Christianity was shifting to the Global South, Islam was growing far beyond the Middle East. In 1900 Turkey represented 5.5% of all Muslims worldwide, today that has fallen to 4.3%. At the same time, Muslims of the wider Middle East (Morocco to Iran) represented about 30% of all Muslims in 1900 but this had fallen to under 25% by 2020. Over time, Muslims have lived with much less diversity. In 1900, 54% of all Muslims lived in countries 50% or more Muslim but this grew to 73% by 2020. Turkish political commentator Mustafa Akyol has pointed out how Islam has a rich history of supporting religious pluralism, a virtue based in the Quran. Muslims generally did not convert the shrines of subjugated peoples; rather, the conversion of churches into mosques came instead from “administration regulation” or the needs of empire. Akyol sees a choice between power (restoration of Ottoman grandeur) and virtue (multireligious coexistence) in Turkey’s stewardship of the Hagia Sophia. He, with many other Muslims, would like to see global Islam engage positively with other religions around the world. In similar fashion, many Christians would also like to see their global faith embrace the challenge of religious diversity in the spirit of benevolence found in the Bible.

The relationship between Christianity and Islam is critical for the future of the planet. Christians and Muslims together represented only 20% of the world’s population in 1453, growing to 57% today (and will likely to rise to 67% after 2050). Turkey still has an opportunity to show its commitment to the rights of all its peoples in choosing virtue over power. The Hagia Sophia is an important symbol of both religions, including their evolution over time, and has the opportunity to help resolve tensions today and in the future. 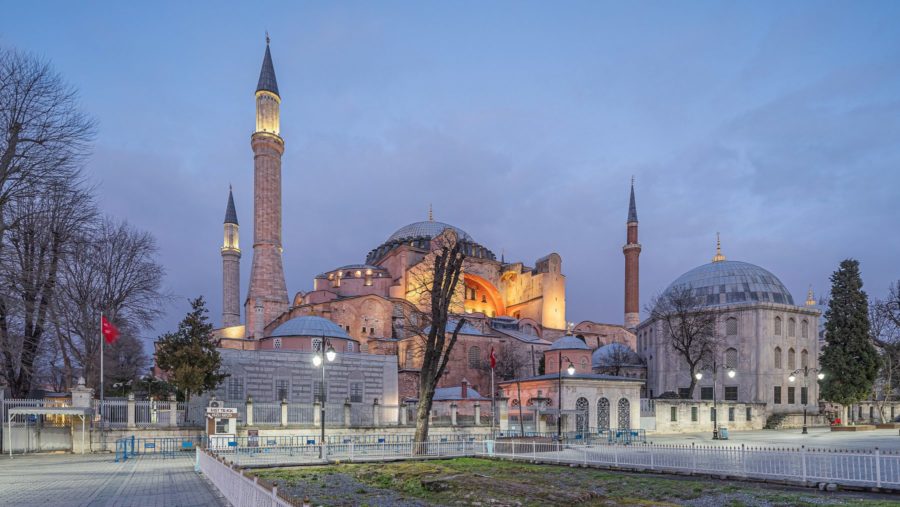