The Complexity of Christian-Muslim Relations

[Editor’s note: I’ve asked friend and colleague Charles Tieszen to submit a guest blog in my series on Christian-Muslim Relations. We read his edited volume A Textual History of Christian-Muslim Relations (Fortress Press, 2015) as part of our course this semester. In addition, Dr. Tieszen visited our class via Zoom and offered this adaptation of the introduction to his book as his blog.]

The history of Christian-Muslim relations is complex. In order to understand it, we have to think about a variety of perspectives. Consider the 11th-century mosque of Bab al-Mardum in Toledo, Spain. Travelers who visit there today may enter the mosque and gaze in wonder at its blind arcades, multi-lobed arches, and ribbed domes. A closer look shows that the columns supporting the mosque’s domes predate the structure by many centuries. The mosque of Bab al-Mardum was formerly a Christian church, and the builders who constructed it repurposed the church’s columns for their mosque.

Using scraps of the former church in the mosque’s construction was resourceful. The irony, however deliberate it may or may not have been, should not be missed. With the new mosque complete, passersby not only saw a triumphant mosque where a church once stood, but they might have also noticed that Christian pillars were now supporting Muslim domes, potentially reminding onlookers of a reversal of fortunes. (See photo at the bottom of the blog).

Walking around the structure’s perimeter, a relatively enormous apse adds to the mosque’s story. Less than a century after the mosque was completed, Christian armies recaptured Toledo. The mosque was reconverted to a church, the Cristo de la Luz, in 1183. At first glance, the structure’s new apse marks a sympathetic extension to the original tastes of the mosque’s designers. It remains honest to the Muslim architecture by employing the same style of foundation, brickwork, and cornice. It retains the blind arcades, lobed arches, and ceramic roof tiles. The church’s apse carries on where the mosque left off, a testament to cooperative architecture, mutual dependence, and a history of peaceful relationships between Muslims and Christians.

Stepping back from the Cristo de la Luz’s design, perceptive onlookers may notice that the Christian addition—the apse—is so much larger that it appears to consume the rest of the building. Once more, the irony of such disproportion must not be missed, for the apse may have stood in some minds as a statement of triumphalism. The Christians who commissioned the structure’s reconversion to a church could have simply destroyed it and built a fresh structure. A more powerful statement would be to repurpose what was already there. The vanquished mosque becomes the stuffed and mounted animal in the victorious Christian hunter’s den, a symbol of receding Muslim control of Spain. Does the Cristo de la Luz tell a story of subjugation or mutual appreciation? And what of the many kinds of stories that lie in between perspectives of subjugation and appreciation?

Traveling north to the library of El Escorial near Madrid, one finds another curious story told by a manuscript of the Books of Chess, Dice, and Board Games. In it, descriptions of games are accompanied by exquisite miniatures illustrating various problems and strategies. The image concluding the section on chess depicts a red-bearded Muslim in his tent hosting a blond Christian nobleman. The tent bears a basmalah (“In the name of God, the Most Gracious, the Most Merciful”) in blue script and is topped with a green pendant. Both men rest on striped cushions positioned on either side of a chessboard.

Like the Cristo de la Luz, this medieval miniature dramatizes the history of Christian-Muslim relations in many ways. Muslims and Christians could frequently be at odds with one another. The characters in this image are playing a mock game of war while sheltering in a war tent. The Muslim wears a sheathed sword, and his two lances stand outside near a tent flap. Close examination of the chessboard reveals that the Christian’s pieces are severely depleted. Cornered, he faces imminent checkmate.

One can look past the war tent and mock battle at what may very well be two friends enjoying one another’s company, wiling away an afternoon over a friendly match of strategy. The Muslim reaches towards a carafe and drinking glass and motions for his companion to take a drink. The Christian gestures appreciatively in response. It’s a rather harmonious scene, reminiscent of frequent instances of inter-communal cooperation and the prosperous exchange of ideas. Can the history of Christian-Muslim relations be described as one of mutual enmity or friendly encounter? What stories are left untold?

Religious treatises pose similar questions. We can find authors like Eulogius, the 9th-century priest from Córdoba, who looked at those adopting Muslim culture and wrote that they were wading in sewage. We can also find the 9th-century Caliph al-Ma’mun who, in a debate with a Christian, announced that they had an opportunity for the free exchange of ideas. All should be welcome to contribute without fear. Here, again, we see examples of contempt and respect, not to mention the myriad of perspectives that overlap and lie in between those extremes. The history of Christian-Muslim relations demands careful study and comes from multiple voices. 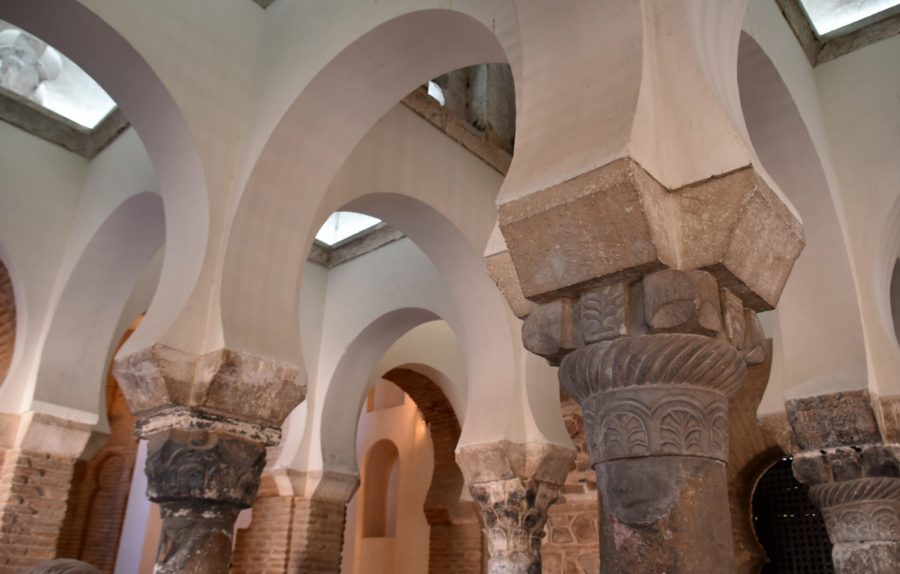