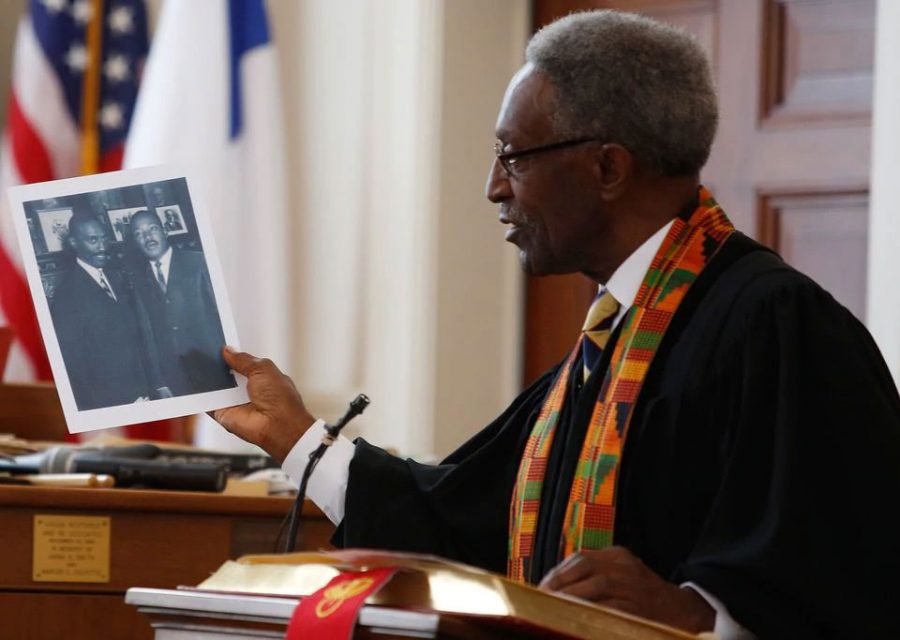 The Rev. Michael E. Haynes showed a photo of himself and Martin Luther King Jr. while speaking at a church in Weston. (JESSICA RINALDI FOR THE BOSTON GLOBE) Used with permission from the Boston Globe. 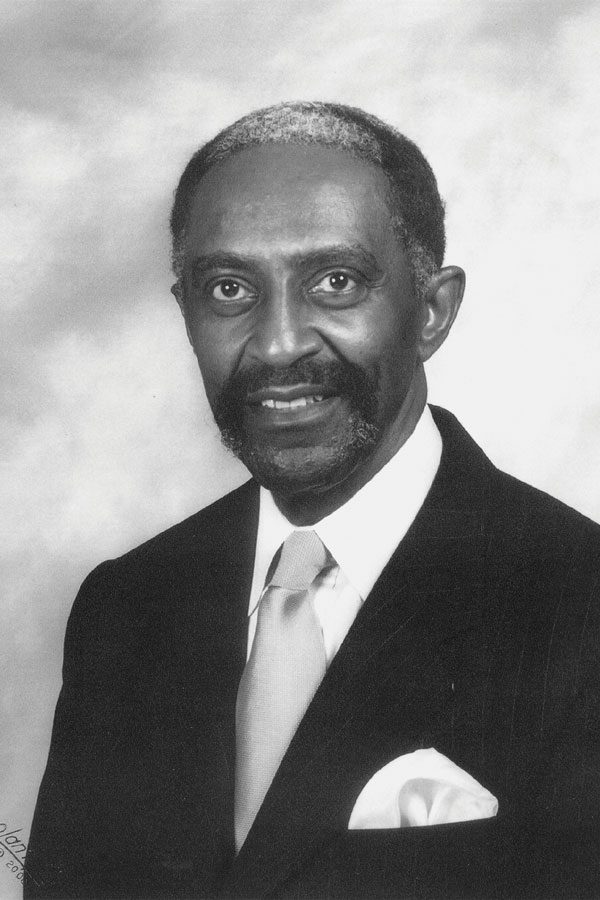 Gordon-Conwell Theological Seminary has lost a great friend, colleague and longstanding member of the Board of Trustees. On September 12, Rev. Dr. Michael E. Haynes went to be with his Lord and Savior, Jesus Christ, after nearly 70 years of dedicated service to the Church and to the Boston community.

Dr. Haynes was born in Roxbury, Massachusetts in 1927, on the eve of the Great Depression. Taught daily about Jesus by a praying mother, Michael surrendered his life to Christ as a teenager. In the following decades, Dr. Haynes passionately represented his Savior to the city of Boston as youth director, teacher, pastor, social worker, state legislator, board member, religious leader and consummate advocate for its people.

His pastoral wisdom and dedication to urban ministry guided the trustees and faculty in developing the Boston campus into a national model of theological education for the urban church. In our work together, I was always impressed with his quiet demeanor, his words of wisdom and the dignity of his stature. He will be long remembered as God’s man for the city.”

In 1951, Dr. Haynes joined Roxbury’s historic Twelfth Baptist Church as Minister to Youth. He also worked at the Robert Gould Shaw House, the State Youth Service Board, the Norfolk House Centre of John Eliot Square and the City of Boston Public Schools. In 1964, Dr. Haynes became Senior Minister of Twelfth Baptist Church, serving until his retirement in 2004. Under his pastorate, more than 30 men and women were called to full-time Christian ministry and have served in national or international leadership positions.

During his early ministry at Twelfth Baptist, Dr. Haynes worked alongside Dr. Martin Luther King, Jr., who was serving as an assistant pastor at the church while finishing his doctoral degree at Boston University. During that time, the two pastors also engaged in local political activities together. After Dr. Haynes was elected to the Massachusetts House of Representatives, he and several other Representatives invited Dr. King to speak at a joint session of the Massachusetts Senate and House. It was the first time Dr. King was asked to address any legislature in the country.

Dr. Haynes’ community service, statesmanship and bold witness for Christ are legend in the city of Boston and beyond. He represented Roxbury and Boston’s South End for three terms in the Massachusetts House of Representatives, and on the Commonwealth of Massachusetts Parole Board, Board of Pardons and Fair Housing Commission. He was a member of the Lausanne Committee on World Evangelization, and provided leadership to more than 40 social, welfare, recreational, criminal justice, governmental, educational and religious boards, including the Billy Graham Evangelistic Association, Vision New England, Christianity Today, Berkshire Christian College, Northeastern University, New England Baptist Hospital and the Boys’ and Girls’ Club of Boston.

Rev. Dr. J. Anthony Lloyd, pastor of the Greater Framingham (Massachusetts) Community Church and chair of the Boston Campus Board of Advisors, described Dr. Haynes as “a pastor’s pastor.” [He was] “always a champion of the role of the seminary in supporting the Church, having ordained and sent forth hundreds into Christian ministry. On his retirement, he was honored by 12th Baptist Church with emeritus status. He served on the Boston Campus [CUME] Advisory Board right up to his promotion to glory.”

Gordon-Conwell has been the profound beneficiary of Dr. Haynes’ commitment to theological education. Elected to the Board of Trustees in 1976, he remained on the board until his death, serving on the Executive and Student Affairs Committees and playing a key role in the development of the seminary’s Boston campus. Initially located at the Martin Luther King, Jr. House of Twelfth Baptist Church when it opened in 1976 with 30 students, the campus now serves nearly 300 students, and hundreds of alumni are reaching the city with the gospel. In 2007, the Board of Trustees dedicated the new headquarters of the Boston campus as the Michael E. Haynes Academic Building—Campus for Urban Ministerial Education.

Dr. Haynes joined the seminary board shortly before President Emeritus Dr. Robert E. Cooley became president. “My best remembrance of Dr. Haynes was his enthusiasm for the urban church and community affairs,” Dr. Cooley recounts. “He was strategic to the founding of the Urban Year program, then the Center for Ministerial Education, and later, the expanded urban program and campus known as Gordon-Conwell Theological Seminary—Boston.

“His pastoral wisdom and dedication to urban ministry guided the trustees and faculty in developing the Boston campus into a national model of theological education for the urban church. In our work together, I was always impressed with his quiet demeanor, his words of wisdom and the dignity of his stature. He will be long remembered as God’s man for the city.”

The Board of Trustees, faculty, administration and staff of Gordon-Conwell Theological Seminary give praise to God for Dr. Haynes’ exceptional commitment and devotion to his church, to his community, to the seminary and to his Savior, Jesus Christ.