Damietta: Francis and the Sultan

The third stop in our blog series on Christian-Muslim relations is thirteenth-century Damietta, a city in northern Egypt that became a military camp for crusaders on their way to Jerusalem. In 1219, during the Fifth Crusade, Francis of Assisi and Brother Illuminato accompanied the European armies to Damietta. But Francis, horrified by the treatment of Muslims and Jews in the Crusades, was determined to visit the Sultan of Egypt in order to speak peacefully with Muslims about Christ, even if it meant becoming a martyr. Having failed to stop the Crusaders from attacking Muslims, he instead crossed the battle line with Brother Illuminato. Under a hot sun, they arrived at the Muslim camp and were immediately arrested. The sentinels led them directly to the sultan, thinking that they were delivering a message from the Christian commander, or that perhaps they had come to renounce their faith.

Sultan Malik al-Kamil was the nephew of the great Saladin, who conquered Jerusalem in 1187. He was the same age as Francis and was known as a mystic, a man of culture, and a lover of religious poetry. He studied medicine and surrounded himself with scholars—astronomers, doctors, and Sufis—whom he frequently consulted. The sultan was a beneficiary of the integration of faith and knowledge that we have encountered in both Baghdad and Cordoba.

The sultan received Francis graciously and asked whether the clerics wished to become Muslims or had come instead with a message from the Christian camp. Francis responded that he did not come to convert, but to present the sultan’s soul to God on behalf of Christ. The sultan then asked his advisors to judge whether Francis’ teaching was genuine. The verdict? The advisors urged him to cut off the clerics’ heads. The sultan conceded that he was indeed bound by law to execute Francis and Illuminato, citing, “The law forbids giving a hearing to preachers. And if there should be someone who wishes to preach or speak against our law, the law commands that his head be cut off. It is for this reason that we command you, in the name of God and the law, that you have their heads cut off immediately, as the law demands.” However, the sultan decided against his own law, because “It would be an evil reward for me to bestow on [one] who conscientiously risked death in order to save my soul for God.” (Murray p. 118)

We know that Francis dialogued with the Sultan and his advisers for some time in an atmosphere conducive to a free exchange of ideas. While Francis presented Christ as the full revelation of God, with Christianity its fullest expression, he apparently never insulted the Prophet nor denigrated the religion of Islam. From a Muslim perspective, al-Kamil’s aim was to “establish a mission of peaceful coexistence with Christians.” In like manner, Francis, rather than condemning, detesting, or putting himself above the Muslims, spoke with respect for their beliefs. Though Francis invited the sultan to become a Christian and was willing to put his life on the line to prove the veracity of his belief, love ruled his action. As such, the risk and disgrace did not matter. The two men shared the centrality of God and humanity’s worship of God, the primacy of prayer in life and the conscious choice to remain “in the world” and live simple lives for the sake of God. As far as we know, the dialogue ended with mutual respect and a reciprocity of dignity. (Warren p. 48–49)

We don’t know how long this encounter lasted. In the end, the sultan gave them food and they were escorted back to Damietta. A zeal for warfare drove Christians further inland in an attempt to conquer Egypt. But these attempts failed and ended in retreat. However, in 1229, ten years after the siege of Damietta, Malik al-Kamil conceded Jerusalem to Frederick II.

Why did Francis undertake such risk? Remarkably, this encounter was rooted in Francis’ vision of universal human fraternity, what we might call today the imago Dei—the fact that every human is made in the image of God and therefore worthy of honor and respect. Along with his peace-loving nature, Francis’ convictions and the conversations he initiated were all the more noteworthy in the midst of war and conflict.

We find ourselves in a strikingly similar context 800 years later. In today’s interaction between Christians and Muslims, one finds fear, mistrust, and even violence. While few on either side would incite a clash of civilizations, many see it as an inevitable consequence when religion mixes with politics and culture. And yet, some have a different vision. Like Francis, they want to advocate an end to violence by charting a peaceful way forward. Are you on the path of peace with fellow humans created in the image of God? 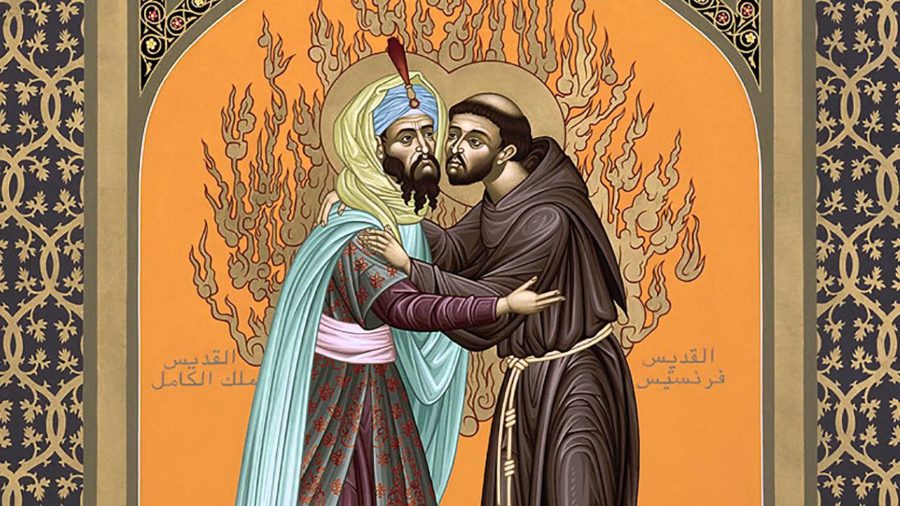 For this retelling, I’m indebted to Wendy Murray for her delightful book A Mended and Broken Heart: The Life and Love of St. Francis of Assisi (2008) and Kathleen Warren for her insightful volume Daring to Cross the Threshold: Francis of Assisi Encounters Sultan Malek Al-Kamil (2003).