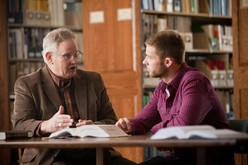 An integral part of the Cooley Center is the Robert C. Cooley Collection in Biblical Archaeology and Early Christianity. Housed in the

Harold Lindsell Library at Gordon-Conwell Theological Seminary, Charlotte, this growing collection contains more than 2,300 volumes, more than a dozen carrels of slides and a sizable collection of periodical literature.

The foundation for the Cooley Collection was drawn from the personal libraries of Dr. Robert E. Cooley, the second president of Gordon-Conwell Theological Seminary, and his son, the late Robert C. Cooley. Dr. Cooley’s longtime work in biblical archaeology, both as a teacher and field researcher, is reflected in the core of this special collection. His son’s love for the study of Early Christianity will also be integrated into future collection development. The many slides in the collection are a gift of Alice Mae Favro and reflect her love for the Holy Land expressed in her 17 trips to that region of the world. Current collection strengths include significant materials related to the study of the Dead Sea Scrolls and reports of various Holy Land archaeological expeditions. Recent additions include the first two volumes of the Leon Levy Expedition to Ashkelon and a number of new works in biblical archaeology. The Cooley Collection contents are searchable through the Gordon-Conwell

online library catalog. Books in the Cooley Collection are identified by the abbreviation: CHRCC. The collection is closed, and books do not circulate outside the Harold Lindsell Library.

Advanced students and researchers wishing to use the collection may do so by contacting Robert Mayer, the Harold Lindsell Library Director, or Mark Poe, the Cooley Research Fellow, and scheduling an appointment.