From January 2018 to June 2020, the Center for the Study of Global Christianity worked in partnership with Oral Roberts University and Empowered21 on a new project on the global Pentecostal/Charismatic movement. Many have heard that Pentecostalism is the fastest-growing tradition in the world, but few have data and information to back up those claims. This study helped inform and equip Christians in both academia and the church. We worked to provide a new demographic assessment of the movement and produce estimates for Pentecostals, Charismatics, and Independent Charismatics in every country of the world for 1970, 2000, 2015, and 2020. In addition, we provided a detailed country-by-country list of Pentecostal and Charismatic denominations and networks around the world, published in the World Christian Encyclopedia (Edinburgh University Press) and the Brill Encyclopedia of Global Pentecostalism (Brill).

Christianity Today highlighted this research project in June 2020, “Have Pentecostals Outgrown Their Name?“, pointing to the new term in the book, “Spirit-Empowered Christianity”. Globally, there are 644 million Christians in the Spirit-Empowered movement, representing 26% of all Christians worldwide. The map below depicts Pentecostal/Charismatic Christians as a percentage of each country in 2020. 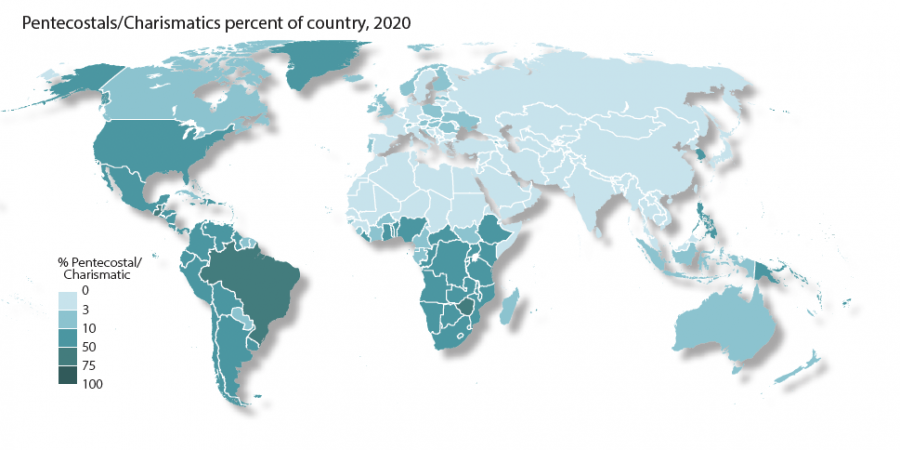 The result of this research project is a book by CSGC co-directors Todd M. Johnson and Gina A. Zurlo, Introducing Spirit-Empowered Christianity: The Global Pentecostal & Charismatic Movements in the 21 Century, published by Oral Roberts University Press. The book is scheduled for publication in September 2020.