A uniquely detailed and comprehensive examination of Christianity on every continent

This series of reference volumes comprehensively maps worldwide Christianity, describing it in its entirety. Each volume covers a continent and offers country-specific studies as well as examining regional and continental trends. Through a combination of maps, tables, charts, and graphs, a full demographic analysis is provided, while original essays explore key topics and trends.

The series includes volumes on:

Placing copies in the Global South 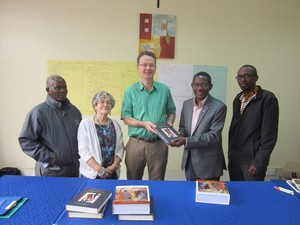 The editors of the Edinburgh Companions to Global Christianity series, as well as Edinburgh University Press, are committed to seeing copies of these volumes placed at institutions in the Global South. Below is a photo of the Sub-Saharan Africa and North Africa-West Asia volumes being gifted to the Akrofi-Christaller Institute of Theology, Mission and Culture, Ghana (with Dr. Mary Bediako and Dr. Philip Laryea) and the Jesuit Historical Institute of Africa, Kenya (with Dr. Festo Mkenda), along with Dr. Kyama Mugambi, editorial manager of the African Theological Network Press. Many thanks to Angus Crichton of the Society for Promoting Christian Knowledge (SPCK) for his help in arranging the purchase and delivery of these books. For more information on discounts for institutions in the Global South, contact editor Kenneth R. Ross.

To order or pre-order:

To order or pre-order a copy of a volume, or to get more information, please visit www.edinburghuniversitypress.com.

Praise for the Edinburgh Companions to Global Christianity:

“This useful reference guide to the profile of Christianity in Africa is a reminder of the important religious and cultural shifts that have transformed the continent in very recent times and helps us keep our finger on the pulse of future changes.” Lamin Sanneh, D. Willis James Professor of Mission and World Christianity, Yale Divinity School

“An accessible and up-to-date reference tool for those interested in finding an overview of the topic… I highly appreciate the attention given to making this a comprehensive text, both geographically and thematically.” Professor Paul Rowe, Trinity Western University