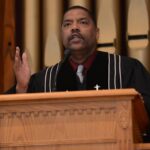 In 1990, Rev. Wright worked as a law clerk for The Honorable David S. Nelson, District Court Judge for the Federal District of Massachusetts. For the next 9 years, he served as a litigation associate in two, major Boston law firms. Wright is a bar certified attorney with skill in litigation, contract and employment law.

From 1999 to 2004, Rev. Wright was chosen to serve as the president and CEO of the African American Federation of Greater Boston, Inc. (the “Federation”) a collaboration of 35 community-based organizations located in inner-city Boston. In this capacity, Rev. Wright has worked with boards and organizations to build infrastructure, do strategic planning, develop and strengthen boards, and obtain other resources critical to the sustainability of community organizations.

In October 2004, he accepted the deputy director position at the Black Ministerial Alliance of Greater Boston, Inc. (the “BMA”). In this position he oversaw day-to-day operations, as well as its programs.

In October 2007, Rev. Wright was chosen to lead the BMA as its executive director. In this capacity he oversaw all aspects of this dynamic faith-based organization. His responsibilities now included setting vision, developing the strategic direction, implementing board priorities, and ensuring the fiscal and programmatic success of the BMA.

In 2020, he was instrumental in the merger of the BMA and the Boston TenPoint Coalition and now is executive director of the new organization, BMA TenPoint, INc..